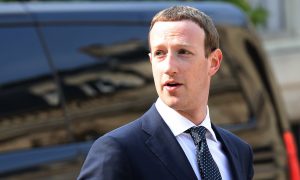 Facebook CEO Mark Zuckerberg on Wednesday criticized Twitters decision to apply a warning label on one of President Donald Trumps posts on the social media platform.

Zuckerberg told Fox Newss “The Daily Briefing” that privately-owned digital platforms should not act as the “arbiter of truth,” after Twitter added fact-checking labels on the presidents posts for the first time on Tuesday.

“We have a different policy than, I think, Twitter on this,” Zuckerberg said in the interview with the news outlet which is scheduled to be aired in full on Thursday.

“I just believe strongly that Facebook shouldnt be the arbiter of truth of everything that people say online,” he added. “Private companies probably shouldnt be, especially these platform companies, shouldnt be in the position of doing that.”

His comments come after the president accused Twitter of election interference and of having a “clear political bias.” The platform added the labels to the presidents tweets which expressed concern about mail-in-ballots.

“Twitter is now interfering in the 2020 Presidential Election,” Trump wrote late Tuesday on Twitter. “They are saying my statement on Mail-In Ballots, which will lead to massive corruption and fraud, is incorrect, based on fact-checking by Fake News CNN and the Amazon Washington Post.”

He added, “Twitter is completely stifling FREE SPEECH, and I, as President, will not allow it to happen!”

Trump said in a Twitter post on Tuesday morning that the use of mail-in ballots, if widespread, would lead to fraud and a “rigged election.”

“There is NO WAY (ZERO!) that Mail-In Ballots will be anything less than substantially fraudulent,” Trump wrote on Twitter. “Mail boxes will be robbed, ballots will be forged & even illegally printed out & fraudulently signed.”

“The Governor of California is sending Ballots to millions of people, anyone living in the state, no matter who they are or how they got there, will get one,” Trump wrote.

There is NO WAY (ZERO!) that Mail-In Ballots will be anything less than substantially fraudulent. Mail boxes will be robbed, ballots will be forged & even illegally printed out & fraudulently signed. The Governor of California is sending Ballots to millions of people, anyone…..

“That will be followed up with professionals telling all of these people, many of whom have never even thought of voting before, how, and for whom, to vote,” the president speculated. “This will be a Rigged Election. No way!”

Twitter later added warning labels to Trumps post reading, “Get the facts about mail-in ballots.” The linked labels lead to a Twitter article with a headline that reads, “Trump makes unsubstantiated claim that mail-in ballots will lead to voter fraud.”

The presidents spokeswoman, Kayleigh McEnany, said that Trump is set to sign an executive order on Thursday “pertaining to social media” in response to Twitters actions.

Responding to Zuckerbergs comments late Wednesday, Twitter CEO Jack Dorsey said on Twitter that the social media platform will “continue to point out incorrect or disputed information about elections globally.”