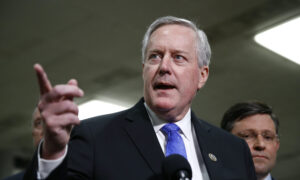 He said in a televised interview that reports about the machines being taken out of service are “not based on fact” and are a “narrative.”

“Theres no sorting machines that are going offline between now and the election,” Meadows said on CNN Sunday. “Thats something that my Democrat friends are trying to do to stoke fear out there. Thats not happening.”

“A sorting machine to handle 100 million ballots, its like a gnat on an elephants back,” Meadows added. “Its not going to matter with 8.6 billion pieces of mail going through the Postal Service every year.” Sorting machines that are not part of an “already scheduled reallocation” will remain, and decommissioning machines is not a new move by the postmaster general.

At the same time, the chief of staff said that Democrats should come back to Washington and negotiate USPS funding along with stimulus package measures including unemployment benefits, stimulus payments, and small business loans.

The dispute over funding the USPS has been punctuated by allegations from President Donald Trump and other Republicans about potential mail-in voting fraud. Some experts have said that election fraud is rare.

Late last week, Trump told reporters that he is willing to sign off on $25 billion in USPS funding if Democrats make concessions on the broader stimulus package.

“Sure, if they give us what we want,” the president said on Friday, at a news conference. “And its not what I want, its what the American people want.”

Before that, on Fox News, Trump insisted that he would not be releasing funds for the agency as part of the deal.

“They want $3.5 billion for something thats fraudulent … for the mail-in votes, universal mail-in ballots,” Trump said on Fox News Thursday. “They want $25 billion for the post office. They need that money so it can work and they can take these millions and millions of ballots.”

Negotiations on the stimulus talks stalled earlier this month, as Democrats sought to push a more than $3.4 trillion COVID-19 package. Republicans earlier unveiled a $1 trillion deal.

The most contentious issue in recent days was whether to provide nearly $1 trillion to city and state governments. Republicans are opposed to the idea, with Trump saying it would be a “bailout” Read More From Source
[contf]
[contfnew]