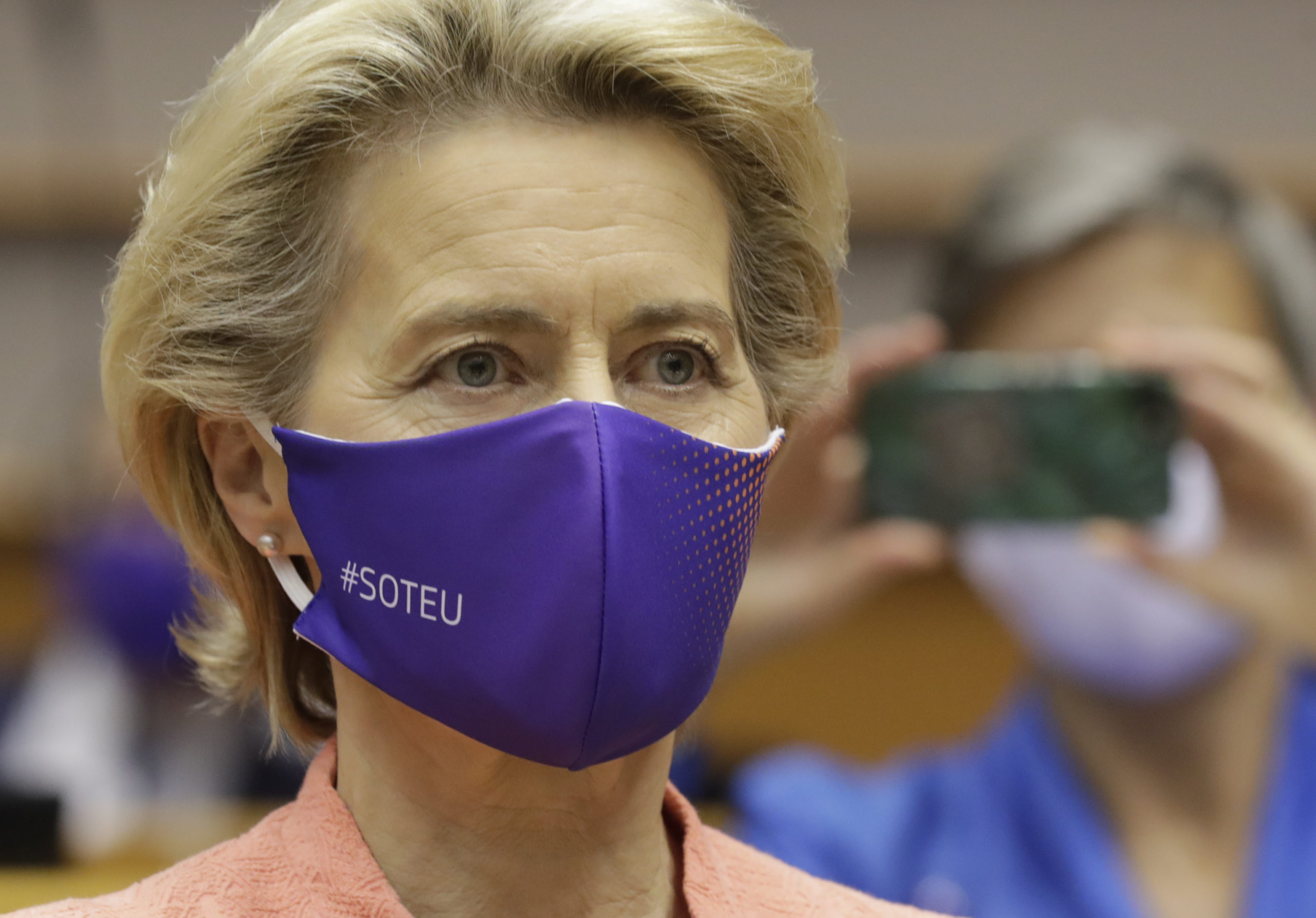 Brussels is stepping up to tackle the big crises, European Commission President Ursula von der Leyen declared Wednesday in her first State of the European Union speech, and she pointedly challenged EU capitals and international powers to do the same.

In the wide-ranging, plain-spoken address to the European Parliament, von der Leyen issued a clarion call for action in the ongoing coronavirus pandemic.

She tried to reassure citizens that Brussels now has a firm grip on the crisis, citing a historic budget-and-recovery package. And she proclaimed the Commissions intent to seize the moment “to build the world we want to live in” — by stepping up action on climate change and digital innovation, fighting racism and discrimination, ensuring decent minimum wages, and expanding the power of the EUs public health agencies.

She highlighted the initially haphazard response to the pandemic from national capitals, and called them out for years of foot-dragging in areas like foreign policy. She demanded EU national leaders set aside the unanimity requirement for foreign-policy decisions, at least on human rights and sanctions, and exhorted them to take more responsibility — for example, to reach a deal on overhauling migration and asylum policy.

Noting the arson fire that destroyed the Moria refugee camp on the Greek island of Lesvos, von der Leyen said the EU would support Greece in building a new reception and processing center for asylum seekers, and would try to play a bigger role in managing asylum cases.

“But I want to be clear,” von der Leyen said. “If we step up, then I expect all member states to step up too. Migration is a European challenge and all of Europe must do its part.”

In the speech, von der Leyen offered few details on the imminent migration and asylum proposal but in a question-and-answer session afterward, she said that the Commission aims to replace the existing procedure on asylum claims known as the Dublin regulation.

“I can announce that we will abolish the Dublin Regulation and we will replace it with a new European migration governance system. It will have common structures on asylum and return and it will have a new strong solidarity mechanism.”

She warned the U.K. not to break international law by violating the Brexit Withdrawal Agreement.

She warned the U.K. not to break international law by violating the Brexit Withdrawal Agreement.

She called out China for human rights abuses against Uighurs and in Hong Kong. She upbraided Russia for a pattern of malign activities, both within and outside its borders, including the poisoning of opposition leader Alexei Navalny. She challenged the U.S. to renew its partnership with Europe no matter what happens in the November presidential election. And she praised Africa as a close “natural partner” for Europe.

From the start of her speech, von der Leyen acknowledged the fragility of society laid bare by the coronavirus, and the deep and continuing anxiety felt by millions of citizens.

In the Brussels chamber where she spoke, MEPs were spaced out for social distancing and wore face masks, some of them in blue branded with #SOTEU for the occasion.

The Commission president praised front-line health workers “who worked day after night, week after week (and) took risks so most of us didnt have to.”

“A virus a thousand times smaller than a grain of sand exposed how delicate life can be,” she said. “It laid bare the strains on our health systems and the limits of a model that values wealth above well-being. It brought into sharper focus the planetary fragility that we see every day through melting glaciers, burning forests and now through global pandemics.”

Von der Leyen turned the sacrifices made by individuals under lockdowns into a larger metaphor for the collective sacrifice demanded of EU countries: to relinquish some national sovereignty for the common welfare. “We showed what is possible when we trust each other and trust our European institutions,” she said.

She also laid out plans to give the EU greater powers to respond to health emergencies, such as strengthening the European Centre for Disease Prevention and Control and the European Medicines Agency, and creating a European version of the U.S. Biomedical Advanced Research and Development Authority. 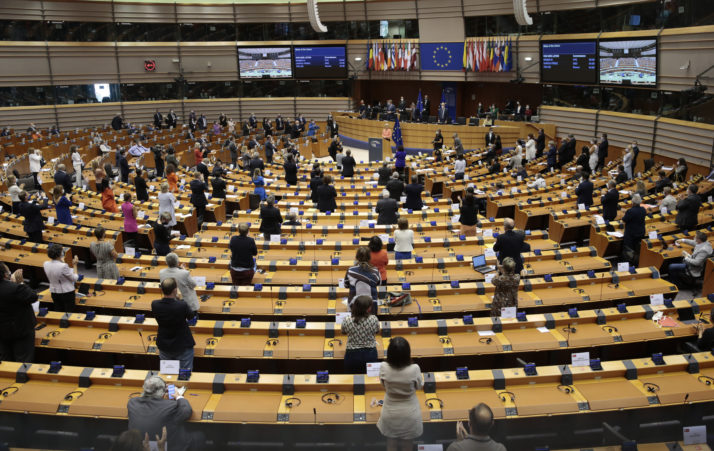 She repeatedly characterized the crisis as an opportunity as well as a challenge.

“This is the moment for Europe,” von der Leyen said. “This is our opportunity to make change happen by design — not by disaster or by diktat from others in the world.”

She proposed ramping up her Commissions two main policy priorities — climate change and digital innovation — with more ambitious targets for reducing carbon emissions and tech investments including €8 billion to develop a new generation of supercomputers.

The Commission will propose “a secure European e-identity … one that we trust and that any citizen can use anywhere in Europe to do anything from paying your taxes to renting a bicycle.”

“We have all seen the forecasts. We can expect our economies to start moving again after a 12 percent drop in GDP in the second quarter” — Ursula von der Leyen, European Commission president

Her other ideas ranged from “a new European Bauhaus” — a creative incubator for architects and artists to work with engineers and designers — to a plea for completion of older, more mundane projects such as a capital markets union and a banking union.

And, while trumpeting the agreement on a historic €1.8 trillion budget-and-recovery package in July, she warned against toning down the response to the economic crisis, which she noted was far from finished, and indeed could turn even worse.

“Now is the time to hold our course,” she continued. “We have all seen the forecasts. We can expect our economies to start moving again after a 12 percent drop in GDP in the second quarter.”

Underlying her entire message was a premise that the EU had ultimately succeeded at points where individual countries fell short — a point that will be debated by national officials who made their own efforts to manage a chaotic and unprecedented situation.

“When member states closed borders, we created green lanes for goods,” she said. “When more than 600,000 European citizens were stranded all over the world, the EU brought them home. When some countries introduced export bans for critical medical goods, we stopped that and ensured that critical medical supply could go where it was needed. We worked with European industry to increase the production of masks, gloves, tests and ventilators.”

Following up on Mondays video summit with Chinese President Xi Jinping, she called his country “a negotiating partner, an economic competitor and a systemic rival.” She pointedly did not call Beijing a friend.

“We must always call out human rights abuses whenever and wherever they occur — be it in Hong Kong or with the Uighurs,” she said. And she insisted that national capitals empower the EU for a swifter response in such situations.

“What holds us back?” she asked. “Why are even simple statements on EU values delayed, watered down or held hostage for other motives? When member states say Europe is too slow, I say to themRead More – Source
[contf]
[contfnew]