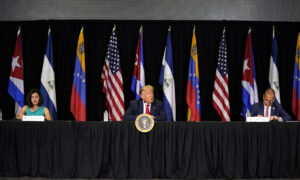 Venezuelan and Cuban activists in Florida on July 10 urged President Donald Trump attending their roundtable on “Supporting the People of Venezuela,” to help people oppressed by socialist and communist regimes in Venezuela and Cuba to regain freedom and eliminate narco-terrorism and poverty.

Ernesto Ackerman, the president of civic group Independent Venezuelan-American Citizens, requested Trump at the roundtable held in Doral, Florida, to “eliminate the germs of socialism” from Venezuela, Nicaragua, Cuba, and other countries in the region and to “help the people of Venezuela to get rid of the narco-terrorists who have kidnapped our nation.”

Ackerman, born in Venezuela, is a son of a Venezuelan concentration camp survivor who still lives in Venezuela. He said that his organization has lobbied the U.S. Congress for over 18 years to impose sanctions on narco-terrorists in Venezuela.

Dr. Orlando Gutierrez Boronat, Cuban-born co-founder and spokesperson for the Cuban Democratic Directorate and a leader of the Cuban exile community, said at the roundtable that there “should be a task force [in the United States] to educate Americans about socialism and communism.”

Gutierrez-Boronat shared key life experiences in communist Cuba that helped him to understand the nature of socialism and communism.

He recalled that church services in Cuba were attended by very few people since churchgoers were persecuted and discriminated against by the communist regime for believing in God.

“Everywhere communism and socialism have come to, the first freedom they strike at is religious freedom,” Gutierrez-Boronat said, adding that this is the reason why the statues of Jesus are knocked down.

“The right to believe or not to believe, to have faith or not to have faith, thats fundamental and thats one of the first things communism in Cuba tried to eradicate. They tried to wipe out Christianity in Cuba,” Gutierrez-Boronat said.

The strategic sanctions imposed by the United States “aimed at the military and the intelligence and security sectors [in Cuba] have weakened them,” Gutierrez-Boronat said, adding that this is why protests erupted in Santa Clara, Cuba, in the past months.

Cuba was self-sufficient, its economy thriving, and it even exported food before the communists took over the country in 1959, he said, but “Cuba today cannot feed itself without U.S. donations of food.”

Gutierrez-Boronat criticized Hollywood and media outlets that spread false information about socialism, communism, and about what happened in Cuba.

He also urged Trump to consider indicting the Cuban regime for its 1996 killing of Cuban Americans who were helping people escape Cuba by rafts in international waters, and for other crimes against humanity that the Cuban regime committed.

Trump said the United States has imposed “historic sanctions” on the Venezuelan regime led by socialist dictator Nicolas Maduro and that it stands with “with the righteous and rightful leaders of Venezuela.”

Trump added that his administration indicted Maduros regime for narco-terrorism and imposed sanctions on Nicaragua for human rights violations.

He ended the Obama administrations “pro-communist policies” that he said Joe Biden has pledged to reinstate.

Congressman Mario Diaz-Balart (R-Fla.) said that socialism and communism in Venezuela, Nicaragua, and Cuba is not only disastrous for people there but also poses a national security threat to the United States.

Lourdes Ubieta, a Venezuelan-born activist who has been working for media in Venezuela and the United States for over 25 years, said that her Cuban parents living in exile in Venezuela fled Cuba to escape “Castro communist tyranny.”

Venezuela was a prosperous and generous country until 1999 when Hugo Chavez took power and imposed socialism on the country.

“Out of 7.8 million children in the country, 40 percent report difficulties to attend school for problems with water supplies, blackout, no food at home, lack of transport, or lack of teachers,” she said. The child mortality rate has also increased dramatically in Venezuela, she added.

Venezuela generates most of its revenue from oil production as its oil reserves are one of the worlds largest. During the 1970s Venezuelas oil industry was nationalized. In 1989 the oil prices plummeted worldwide causing the countrys oil-reliant economy to fall. Consumer prices including food and gas increased and peoples living conditions deteriorated.

Chavezs socialist policies made the country even more dependent on oil export and his successor, Maduro, continued his policies.