The Trump administration rolled out new non-binding guidelines Wednesday for regulating driverless cars and trucks — its second move this week to advance a light-touch approach to tech regulation that contrasts with the strategy key European leaders are advocating.

The twin moves came during a week when three Cabinet secretaries and Trumps daughter Ivanka were scheduled to make appearances at the CES conference. And they arrived just two months before Europe is set to initiate legislation on artificial intelligence, a key pledge by European Commission President Ursula von der Leyen that would make the continent the first region in the world to pass hard laws for AI.

“Europe and our allies should avoid heavy handed innovation-killing models, and instead consider a similar regulatory approach,” the White House said Monday night in a fact sheet on its AI approach.

But high-ranking EU officials are pursuing a much different vision — the belief that by coming up with rules early, Europe will set a global standard for AI regulation.

Its the first time the White House has taken a direct role in designing Department of Transportations autonomous vehicle guidance.

The outcome of the competing strategies is of high interest to a number of industries, especially as China aims to achieve global dominance on emerging technologies including self-driving cars, facial recognition and drones.

The principles Chao announced Wednesday are the Transportation Departments fourth set of guidance on driverless car development, aiming to craft a unified policy approach for the 38 federal agencies, commissions and White House offices that have some hand in dealing with the technology. The voluntary approach is expected to draw applause from tech companies and carmakers.

But the industry still wants more — a federal law that would set nationwide standards for allowing the technology to hit the streets, instead of the existing set of differing state-by-state regulations. And so far, Congress has stalemated over issues such as manufacturers legal liability for crashes and the roles of state and local governments in testing and deploying the technology, leaving DOTs guidance as the only definitive word from Washington, for now.

“The takeaway from [the new guidance document] is that the federal government is all in for safer, better and more inclusive transportation, aided by automated driving systems,” Chao said at the event, which was webcast live. 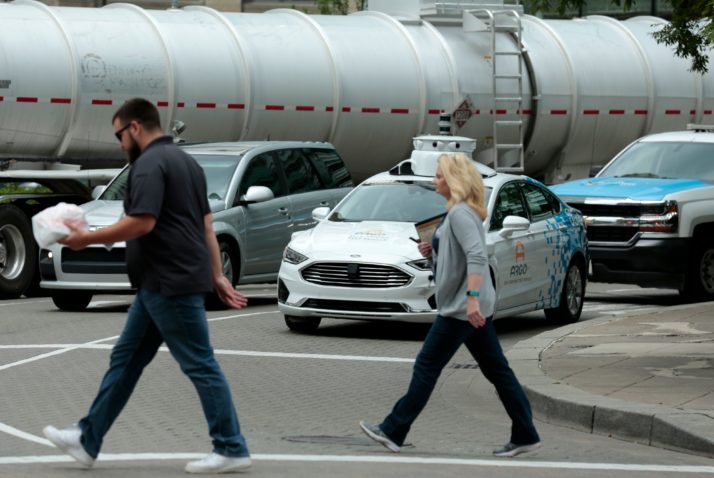 “The White House is directing federal agencies to avoid preemptive, burdensome or duplicative rules that would needlessly hamper AI innovation and growth,” Kratsios wrote, describing the guidelines as critical to keeping Chinas authoritarian use of artificial technology from gaining global sway. He added, “The best way to counter this dystopian approach is to make sure America and our allies remain the top global hubs of AI innovation.”

Chao told POLITICO in an interview before her speech that the Trump administrations strategy strikes the right balance between encouraging innovation and addressing consumers concerns.

“America is known throughout the world for our innovation, for our creative spirit and it is part of our inter-competitiveness, and so we want to foster innovation,” she said. “But there are also legitimate public concerns expressed about safety, security and privacy.”

To develop the new guidelines on self-driving cars — officially, version 4.0 — the DOT detailed a policy staffer to the White House, working “hand in hand” with the Office of Science and Technology Policy on crafting the version introduced Wednesday, said a DOT official who requested anonymity to speak about the document before its release. Its the first time the White House has taken a direct role in designing DOTs autonomous vehicle guidance.

This version of the guidance builds upon the safety-focused 2.0 version and 3.0, which unified the departments position into what the DOT official called a “one DOT approach.” The latter addressed all modes of transportation, including trucking and transit, and added “more guidance and more clarity on who does what and how things [should] be done.”

Europes new political leadership remains divided over what the rules should look like.

With 4.0, that “one DOT” approach becomes a “one federal government” approach.

“Before this, there wasnt any good sense of who all was doing what in this space,” said the DOT official. “So we coordinated all these assets — billions and billions of dollars in research going on in real time now — aligning all these efforts together under 10 principles.”

For now, the departments oversight doesnt include any binding requirements for companies making autonomous vehicles. The guidelines encourage driverless-car manufacturers to submit safety self-assessments, but they are purely voluntary. Furthermore, the DOT has been reluctant to intervene in response to early signs of trouble, such as multiple fatalities related to misuse of Teslas Autopilot feature.