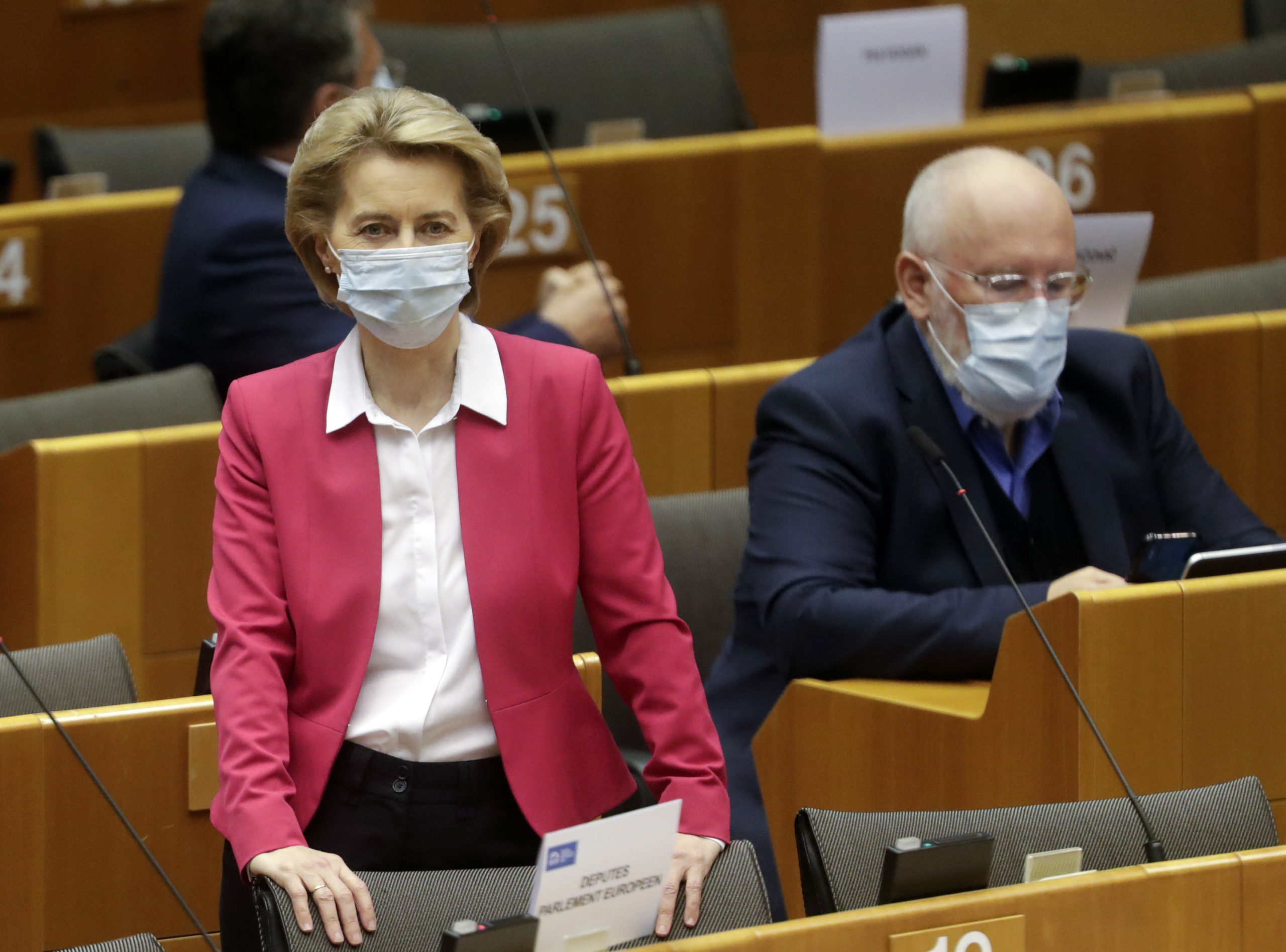 Its Ursula von der Leyens €750 billion bet: that economic damage from the coronavirus crisis is so devastating, EU countries will take a huge leap of faith and effectively sign up for a joint credit card.

By proposing a €750 billion recovery fund, using borrowed money to be repaid over 30 years, the European Commission president is wagering that national capitals will put aside any misgivings, and not only agree to the novel financing mechanism to get EU economies back on their feet, but also cut a fast deal on a €1.1 trillion, seven-year budget that will secure resources for her priorities including fighting climate change and promoting digital transformation.

Skeptics of her plan — especially the leaders of Austria, Denmark, the Netherlands and Sweden — argue von der Leyen is welcome to gamble her presidency as she likes, but not using their taxpayers money. Fierce negotiations now lie ahead.

Much of von der Leyens presentations on Wednesday, as well as briefings by commissioners and other officials, seemed tailored to convincing those skeptics, the so-called “frugal four,” that there was not as much to fear in her proposals as they anticipated.

Appearing first in the European Parliament, where she arrived wearing a white face mask and spoke to a largely empty chamber with MEPs scattered for social distancing, then at the Commission where she fielded questions from reporters connected via an interactive videoconference platform, von der Leyen insisted that the drastic economic downturn required an extraordinary response. But she said it would not permanently change how the EU manages member countries money.

“This is a completely new concept and a new step forward … The crisis is so huge, we have to take unusual steps” — Ursula von der Leyen, European Commission president

The result, at times, was a series of seemingly contradictory statements.

She billed her plan, called Next Generation EU, as revolutionary, but insisted it was not a new normal.

The Commission proposed help for business and industries, such as the aviation sector, but also proposed levying a new tax on big companies.

Von der Leyen presented her proposal as the best possible package — €500 billion in grants; €250 billion in loans — but admitted those amounts, and even the overall size of the recovery fund, will be up for negotiation with the EUs 27 heads of state and government. The entire EU would issue bonds, guaranteed by national commitments to the blocs budget, and would repay the debt jointly, but this should not be viewed as “debt mutualization.”

“This is a completely new concept and a new step forward,” von der Leyen said at one point, adding: “The crisis is so huge, we have to take unusual steps.”

But in response to questions she also said, “This would allow EU member states to contribute to the next budget at the same level as they currently do.” And she said of the unprecedented borrowing program, “I want to be clear, this is one-off and this is an exception.”

At least some of her message appeared to be well-received in the capitals it was aimed at.

“What we find positive — not just myself, but the Netherlands, Sweden and Denmark — is that there is a time limit and that the fund will be a one-time emergency measure and not the first step towards a debt union,” Austrian Chancellor Sebastian Kurz said in an interview with POLITICO. “Considering that there are many in Europe who want such a debt union, its important to us that this be clarified in writing once and for all.”

Banking on Merkel and Macron

Von der Leyen and her team are clearly counting on supporters, especially German Chancellor Angela Merkel and French President Emmanuel Macron, to wield the political muscle needed to bring all 27 EU countries on board.

Merkel and Macron last week put forward their own joint proposal for the EU to borrow €500 billion and use it to distribute grants to member countries hit hardest by the pandemic. But while von der Leyen proposed that same amount in grants and another €250 billion in loans, she conceded the figure could very well change.

“I think especially in this exceptional situation where we really need a clear and strong and united answer to this crisis, this was and is a big step forward,” von der Leyen said, noting that the EU had long used the same approach in the past to borrow far more modest sums.

Enzo Amendola, Italys minister for European affairs, praised the proposal, calling it “a solid basis for a successful conclusion to the negotiations.”

And in a sign that efforts were underway to foster goodwill between north and south heading into the budget talks, Dutch Prime Minister Mark Rutte tweeted that he had spoken with his Italian counterpart, Giuseppe Conte, on Tuesday, and he praised Italys recovery efforts.

Von der Leyen said EU members were already broadly agreed on broad principles. But some of the items that are yet to be agreed are hardly trivial.

She added, “What part is loans? What part is grants, or do we have only grants or only loans? That will have to be discussed, and I think its positive that we are now starting to work with the solution. It will change. In any negotiation, a concept is partly changed. But I am deeply convinced that is the sound answer we should give.”

Across the street from the Commission headquarters, Council President Charles Michel and his team immediately set to work, phoning capitals to gauge reactions to the proposal, and announcing that EU leaders would hold a summit on June 19, possibly their first in-person gathering since the pandemic forced countries into lockdown back in March.

“Everything should be done to reach an agreement before the summer break,” Michel said in a statement. “Our citizens and businesses have been heavily impacted by the pandemic. They need targeted relief without delay.”

Council officials said they were analyzing the Commissions proposed recovery fund, as well as the revised €1.1 trillion core budget plan, in an effort to understand what they will mean for each of the 27 EU countries.

“We to make sure the allocation is fair,” a senior Council official said, noting that while Italy and Spain suffered the most from coronavirus, the economic hit was felt across the entire Continent.

“We cant just say Italy and Spain and thats it, full stop,” the official said. “Its a psychological issue as well. We have all seen deaths. Its emotion. You wont be able to avoid that.”

For the Council, and the 27 member countries, numerous technical questions remained to be answered, including exactly how the Commission had calculated its allocations, and precisely what cuts had been made to various programs in order to accommodate some of the new spending.