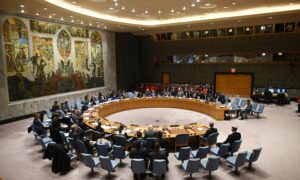 The United Nations Security Council failed to adopt a U.S. resolution to extend arms embargo on Iran which will expire in October. The United States vowed to take action to extend the embargo to prevent Iran from purchasing and selling weapons to terrorist organizations across the Middle East.

The U.N. Security Council met on Thursday evening to vote on a U.S. resolution that would indefinitely extend the U.N. arms embargo on Iran.

Voting was conducted via email due to the CCP (Chinese Communist Party) virus, pandemic.

In the results announced on Friday evening, the resolution failed to garner a minimum of nine “yes” votes in the 15-member Security Council. China and Russia opposed extending the weapons ban, eleven members abstained, including France, Germany, and Britain, while Washington and the Dominican Republic were the only yes votes, according to Reuters.

The U.N. Security Council failed ”to uphold its fundamental mission … of maintaining international peace and security,” U.S. Secretary of State Mike Pompeo said in a statement.

“It rejected a reasonable resolution to extend the 13-year old arms embargo on Iran and paved the way for the worlds leading state sponsor of terrorism to buy and sell conventional weapons without specific U.N. restrictions in place for the first time in over a decade,” Pompeo said in the statement.

Many Middle East countries, including the six members of the Gulf Cooperation Council and Israel, appealed directly to the Security Council to extend the arms embargo on Iran, but their requests were rejected, according to the statement.

“These countries know Iran will spread even greater chaos and destruction if the embargo expires, but the Security Council chose to ignore them,” Pompeo said in the statement.

“The United States will never abandon our friends in the region who expected more from the Security Council,” Pompeo said.

Pompeo said in Vienna on Friday, where he met with the U.N. nuclear watchdogs head, Rafael Grossi, and with senior Austrian officials that allowing this arms embargo to expire on October can also pose a threat to the “European people” as well.

“We cant allow the worlds biggest state sponsor of terrorism to buy and sell weapons. I mean, thats just nuts,” Pompeo said at a joint press conference in Vienna.

“It doesnt make sense for the European people either, … and we think anybody thats within missile range will be at greater risk because of the air defense systems, for example, that the Iranians will be able to purchase if this arms embargo expires on October 18th,” Pompeo said.