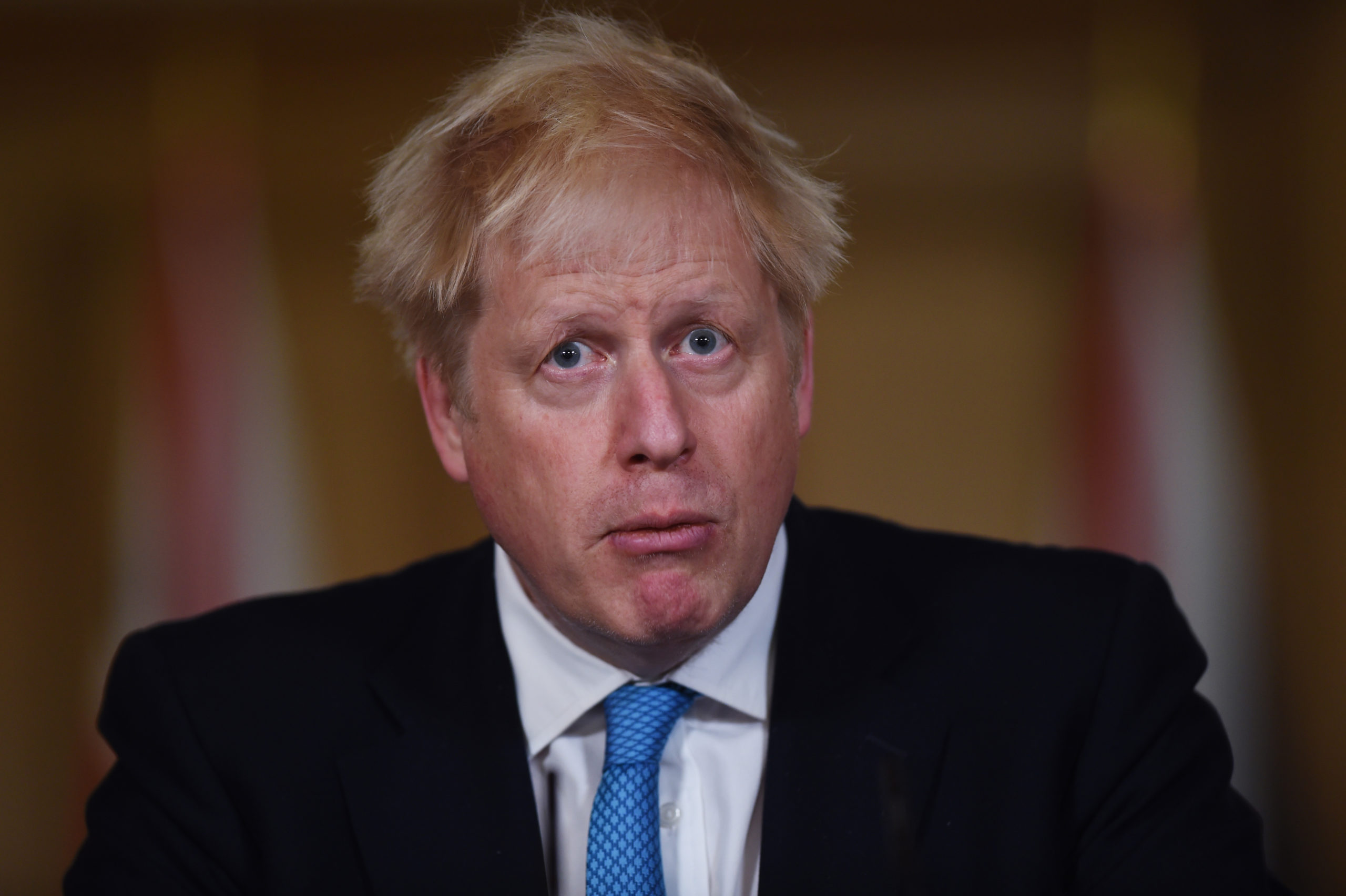 LONDON — The U.K.’s second wave of coronavirus shows every sign of being as bad — if not worse — than the first. It also lacks one ingredient that, last time around, made things easier to bear: national unity.

When Boris Johnson put the U.K. into lockdown in March, with an unprecedented package of state support to save jobs, there were few dissenting voices. Last week, when he set out a three-tiered system of restrictions (short of total lockdown), against the advice of the government’s own scientists who wanted tougher measures, an already crumbling national consensus collapsed.

Labour’s Opposition Leader Keir Starmer — hitherto critical of the government’s COVID-19 tactics but on board with the overall strategy — broke ranks to call for a national so-called “circuit breaker” lockdown, something the government’s own Scientific Advisory Group for Emergencies (SAGE) had recommended privately in mid-September.

Unity within England is fractured too. Andy Burnham, the Labour mayor of Greater Manchester, said his city was “fighting back” against government plans to put them in the highest “tier three” category of restrictions without commensurate financial support (the government, with an eye on soaring national debt, has pared back its jobs protection scheme).

The political divisions are far starker than they were in the first wave of the U.K.’s epidemic, with commentators now comparing the tone with the fractious COVID-19 debate in the U.S.

Voters’ nerves are fraying, too; while opinion polls still indicate strong support for restrictions to slow the virus, focus group research is uncovering a public confused, exasperated and potentially less likely to comply.

“It is a very different mood to the one in April,” said former Downing Street pollster James Johnson of JL Partners, who has conducted several focus groups in recent weeks. “There is a lot of fatigue, frustration and confusion … We are in a very different situation which I think can only mean less compliance. This happy, obedient picture being sketched by the polls — it’s actually very different and it’s not going to be anything like last time.”

That doesn’t mean, James Johnson said, that the U.K. will see mass disobedience. But it’s bad news for the government nonetheless.

“It’s resignation, not revolution,” he said. But there is “a lot of frustration,” particularly with the ailing NHS Test & Trace system, which Boris Johnson said in July would “play a vital part in ensuring that we do not have a second spike this winter,” but which has been beset by problems.

“There is no doubt trust has gone down,” James Johnson said. “Some of the rhetoric definitely jars.” The phrase “world-beating,” in reference to Test & Trace, often came up in focus groups, he added. “People have referred to that and just laugh at it — in disbelief.

“Then there’s the confusion element. Lots of people are saying they don’t know exactly what the rules are.” A viral video by comedian Matt Lucas from the spring, mocking the prime minister’s unclear explanations, “has been mentioned in every focus group I’ve done since May,” he said.

“Also,” the pollster added, touching on a basic but non-negligible reason a second wave could be grimmer: “It’s cold.”

The new three-tier, regional approach is unlikely to help resolve public bewilderment, according to leading infectious disease expert, director of the Wellcome Trust and member of SAGE Jeremy Farrar, who believes the pandemic has reached a point in its upward curve where a national, “circuit-breaker” lockdown is now needed.

“It’s very evident that the arguments over regional lockdowns are causing confusion and delays. These sort of public disagreements, and a lack of transparency over what’s going on behind the scenes, really will fuel a lack of trust in what is being done,” he said.

“I understand the difficult balance the government has, but we need to remember there is a lot of value in a sense of equity, fairness and collective action. Cohesion is important. Setting regions against each other, or nations within the U.K. against one another, only fuels resentment and bitterness. And it’s consuming energy that is better spent on the solutions.”

Without consensus, he added “issues start to become defined not by their public health value but through a political perspective” — something for which there are already international parallels. “What’s happened with the politicization of masks in the U.S.A. is a very clear example of this,” Farrar said. “This does nothing for the trust that is crucial to effective public health measures.”

The idea that the virus can now be contained with a region-by-region strategy isn’t just bad for national unity, it’s bad science, many government advisers believe.

Farrar has said that even the top-level, tier three restrictions would not be enough “to turn the epidemic around,” but would hurt local economies all the same. “In a sense, we’re almost in the worst of all worlds here and we’re ultimately going to have to choose,” he told the BBC on Thursday.

When Farrar and other members of SAGE speak — increasingly critically — to the media about these issues, they are often saying things that Johnson’s top scientific advisers Chris Whitty and Patrick Vallance would like to but can’t, according to one government official. “The advice from scientists was very clearly ‘circuit breaker’ a few weeks ago,” the official said. “But politically the Chief Medical Officer [Chris Whitty] and Chief Scientific Adviser [Patrick Vallance] have to retain the faith of people in the heart of government.”

Whitty himself was as upfront as he could be in a press conference last Monday, saying that he was not confident the “baseline” tier three measures — shutting bars and pubs, banning almost all household mixing — would be enough (local authorities can add measures if they choose, in consultation with government). He also had a message about the need for “political consensus.”

The “central thing” about this next phase of the U.K.’s epidemic was that “people buy into” the new measures, he said.

“I don’t just mean political leaders — although [it’s] absolutely essential that they do, and that there is as much consensus as possible — but also everybody’s got to buy into them. That’s how it works,” he said.

No. 10, so far, is sticking to its guns and its regional approach. Cabinet Office Minister Michael Gove told the BBC’s Andrew Marr on Sunday that the government had evidence that tier three restrictions plus “tailored” local add-ons could bring down infection rates and the prime minister — while not ruling out further steps — has argued it makes no sense to shut down businesses in areas with low transmission.

At that same press conference last Monday, Johnson chose to be flanked by Whitty on one side and his Chancellor Rishi Sunak on the other — a visual representation of the “balanced approach” he says the government is taking, weighing both the public health imperatives and the need not to harm the economy with overly harsh restrictions.

It’s a framing for the debate that is increasingly questioned, in another sign of how consensus is crumbling in the second wave.

“The supposed choice between saving the economy and saving lives, between restrictions and freedoms, is an entirely false one,” said Mayor of London Sadiq Khan on Thursday, as he announced the capital was going into tier two restrictions (he, like his party leader, backs a national “circuit breaker” lockdown). “The later we take the necessary steps to slow the spread of the virus, the more severe these steps will have to be and the longer they will have to last in order to drive down infection rates.”

His words represent a clear strategic difference of opinion with the government, something unheard of in the first wave.

In fairness to the government, back then the economic choice to bail out businesses and support jobs to the tune of tens of billions of pounds (though unprecedented) was made easier by the very fact that it was the first time. Now, according to the Institute for Fiscal Studies think tank, those spending decisions have forced government borrowing up to levels not seen in the U.K. outside the two world wars.

No wonder Foreign Secretary Dominic Raab, when asked on BBC Radio 4’s Today program on Friday whether the government offer for businesses and citizens would increase, responded that — while everything is always under review — there was “inevitably a limit at some point about how much money we can churn.”

But where that limit should be is becoming fierce political battleground. For Louise Casey, until recently government’s lead adviser on homelessness, the current level of support won’tRead More – Source
[contf]
[contfnew]