The strategies focus on taking advantage of loopholes in the United Kingdoms decades-old campaign-financing rules, which separate political parties spending from that of local candidates. These gaps allow national campaigns to buy paid-for messages in local constituencies that may breach existing electoral law.

But the level of sophistication in targeting would-be voters offered by social media companies like Facebook — which have reams of data on their users — has made such tactics both more widespread and more cost-effective for parties aiming to reach potential supporters. All British political parties now advertise on social media; Facebook in particular has garnered roughly 80 percent of such political ads, according to a POLITICO analysis of companies transparency reports.

That has made it easier to blur the lines between national and local spending, and harder to keep track of whos buying these paid-for ads that target voters online.

“Everyone is playing around with the spending limits” — Sam Jeffers, co-founder of WhoTargetsMe

“Are they testing the boundaries of legality? Almost certainly,” said Justin Fisher, a professor of political science at Brunel University, in reference to how national campaigns are buying social media ads on behalf of local candidates. “But would a more regulated system be better? Probably not.”

Fisher explained that forcing political parties to be more overtly transparent about their funding practices would likely not solve the problem, and could instead force a greater regulatory burden on smaller parties compared with their bigger rivals.

Under Britains existing campaign-financing rules, national political parties can spend up to £19.5 million on the December 12 election, as long as they stand a candidate in each of the countrys 650 constituencies. These funds can be used on nationwide advertising campaigns, partisan messaging (both online and offline), rallies and other political activity. They cannot be used to help the electoral prospects of a specific candidate.

Additionally, each local candidate can spend roughly £16,000 (the figure depends on the number of registered voters in the constituency) on their own advertising, public meetings and administrative costs, with would-be lawmakers facing fines or disqualification if they breach that limit. 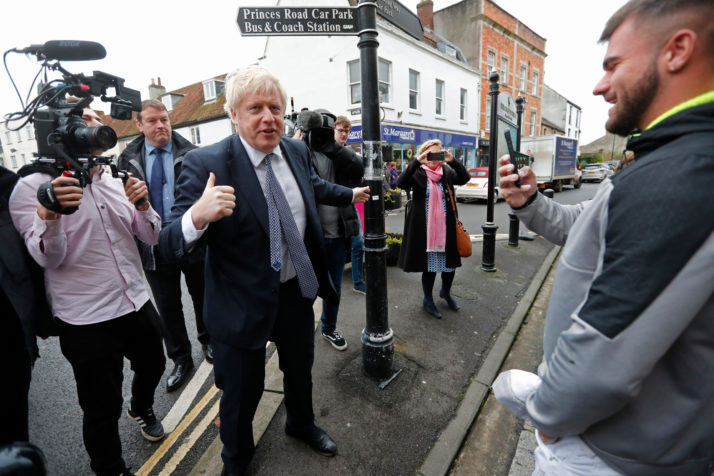 “Everyone is playing around with the spending limits,” said Sam Jeffers, co-founder of WhoTargetsMe, a British organization that relies on people downloading software onto their computers so the group can track political advertising on individuals Facebook pages. “Its now a common practice.”

The Conservatives and Labour Party have taken center stage in testing the U.K.s creaking electoral rules.

In recent weeks, both parties national campaigns have used their funds to purchase social media ads that promoted specific local candidates or attacked their direct opponents, according to a review of the Facebooks transparency records. Such spending, if not correctly allocated to these candidates, may have breached the countrys campaign financing rules.

In Prime Minister Boris Johnsons Uxbridge constituency, for instance, the Conservative Party paid up to £5,000 for a Facebook ad — that ran between October 11 and November 3 — to promote his support to keep a local police station open. In the online video, Johnson stands along a main road in his constituency, mixing local messages about his backing for the local police station with national campaign slogans related to Brexit.

In early November, the party also bought a series of Facebook paid-for messages that promoted individual candidates in several marginal constituencies across the country, although it was unclear how the spending was attributed to either the national or local campaigns.

Labour also has pushed the limits of what is allowed under U.K. law, including the purchase of up to £299 worth of social media ads by the partys national campaign to attack Francesca OBrien, a Tory candidate standing in Gower, a Labour-held Welsh seat with a 3,000-person majority that voted 50/50 to leave the European Union during the 2016 Brexit referendum.