LONDON — Be careful who you retweet — especially during election campaigns.

Wayne Bayley, a retired pilot who had been planning to run for a seat representing Nigel Farages Brexit Party in the U.K.s December 12 election, was revealed as the victim of a Twitter hijack on Tuesday after a fake account in his name duped many in the media.

The incident illustrates the possible impact of digital fakes on British politics, how difficult it can be to correct the record, and how such Twitterstorms now generate very real publicity.

The fake account, which was suspended on Tuesday night, was tweeting as @Wayne_BayIey, with the L in the surname replaced with a capital I, in order to look as similar as possible to the real @wayne_bayley account. It has been active since the real Bayley joined Twitter in August, but received national publicity after it tweeted a foul-mouthed response to Farages announcement Monday that he was withdrawing his partys candidates in hundreds of seats.

The Brexit Party leader said he would stand his troops down in the 317 seats the Tories won at the last election to avoid splitting the anti-EU vote. Bayleys seat of Crawley is one of those the party wont contest.

The fake account tweeted: “F*ck your election strategy and F*ck Boris [Johnson].” It also claimed Bayley was “very disappointed to see Nigel bottle it and back the EU treaty agreed by Boris,” and insisted the candidate would still stand in the election, possibly for UKIP.

In an even more ludicrous post, the account said: “I employed a full time campaign coordinator last week on a two month contract, which has cost me thousands. I also have an outbuilding FULL of Brexit Party leaflets and signs ready for next weeks launch [sic]. Nigel owes me over TEN GRAND.”

And when it faced claims of being a fake, the account insisted: “Just now hearing that someone pretending to be me has created a fake twitter profile and has been in contact with journalists to claim that mine is in fact the fake account. This is fake news!! I am the real Wayne Bayley.”

But the real Wayne Bayley knew nothing about the fake account until journalists began calling him on Monday looking for quotes complaining about Farage.

Things quickly spiraled out of control. 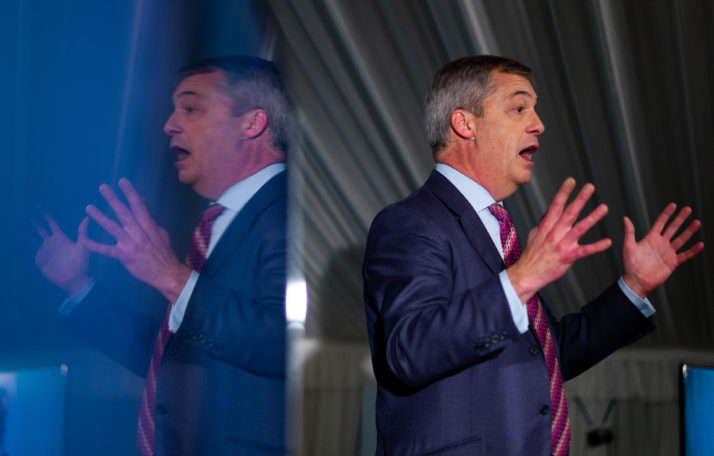 News organizations including ITV and the Huffington Post used the tweets to write stories about a Brexit Party candidate apparently angry at being dumped. Some of those stories have since been deleted.

In a piece about annoyed Brexit Party candidates, the Indy100 website said: “Another former Brexit Party PPC is Wayne Bayley, who was running in Crawley and is now claiming that Farage owes him ten grand, is willing to stand as an independent candidate as well as reaching out to Ukip.”

The New European said Bayley was a scientologist, and embedded a number of the fake tweets into its story, which was still online at the time of publication.

The Express and Star claimed, in a story still on its site: “A bitter ex-Brexit Party candidate who was sensationally dropped after his party backed out of more than 300 seats has said Nigel Farage owes him £10,000.”

“Ive had so many media outlets contact me,” Bayley told POLITICO. “Ive got three interviews lined up for tomorrow. I think its astonishing how these things can backfire. I think this person who hijacked my I.D. waRead More – Source