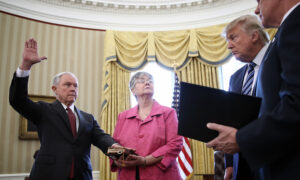 President Donald Trump renewed criticism of his former Attorney General Jeff Sessions as he reiterated an endorsement for Sessions opponent in a U.S. Senate seat in Alabama.

Sessions left the Senate to join Trumps cabinet in 2017, but Trump grew upset with him when he recused himself from the investigation into Russian interference in the 2016 election, including an examination of possible links between Russia and Trumps campaign.

“He let our Country down. Thats why I endorsed Coach Tommy Tuberville,” he added, calling the former college football coach “the true supporter of our #MAGA agenda!”

Trump was commenting on Twitter after Tuberville claimed Sessions threw Trump “to the wolves” when he recused himself.

“When faced with supporting POTUS or running scared, Jeff Sessions chose the easy way out and recused himself. I wont ever run from a fight in the U.S. Senate,” Tuberville, a political neophyte, said in a social media statement.

Sessions responded to Trump directly on Twitter, telling him: “Look, I know your anger, but recusal was required by law. I did my duty & youre damn fortunate I did.”

“It protected the rule of law & resulted in your exoneration. Your personal feelings dont dictate who Alabama picks as their senator, the people of Alabama do,” he added.

Sessions later alleged Tuberville is “too afraid to debate me.”

“He says youre wrong on China & trade. He wants to bring in even more foreign workers to take American jobs. Thats not your agenda and its not mine or Alabamas. I know Alabama. Tuberville doesnt,” Sessions said.

Both Republicans are vying to unseat Sen. Doug Jones (D-Ala.) after emerging from a crowded GOP primary. Jones, considered one of the weakest Democratic incumbents in the Senate, faced no opposition in the primary.

Sessions and Trump have repeatedly sparred since the former attorney general announced the bid for his former seat earlier this year.

No special counsel probe would have happened if William Barr, the current attorney general, was serving in the position at the time Sessions was, Trump asserted in early May.