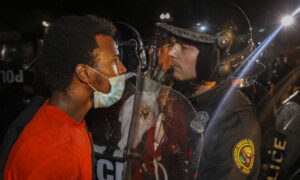 “Great job last night at the White House by the U.S. Secret Service,” he wrote in a Twitter post on Saturday morning. “They were not only totally professional, but very cool.”

“I was inside, watched every move, and couldnt have felt more safe,” he added.

Trump said that the protesters are professionally organized but were kept away from the fence efficiently by the agents.

“Nobody came close to breaching the fence. If they had they would have been greeted with the most vicious dogs, and most ominous weapons, I have ever seen,” he said.

His remarks came after protests caused a brief lockdown at the White House on Friday evening.

Hundreds of people gathered outside the White House late Friday to protest the killing of George Floyd, a black man in Minneapolis.

Floyd died after a police officer knelt on his neck for several minutes while taking him into custody on Monday. The officer, Derek Chauvin, was fired on Monday and charged with third-degree murder and second-degree manslaughter on Friday.

The death of Floyd caused a national uproar.

Protests exploded in dozens of cities around the nation on Friday night with occasional looting, burning, arson, and vandalizing.

Outside the White House, protesters hurled pieces of bricks, bottles, and other objects at Secret Service and U.S. Park Police officers who were in riot gear behind barricades. Protesters at times kicked and punched officers and wrestled over the barricades.

The crowd of hundreds chanted “No justice, no peace” and “Say his name: George Floyd.”

As some in the crowd grew more aggressive, police deployed pepper spray to keep them back and maintain a perimeter of officers around the White House. Other demonstrators came to the aid of protesters who were sprayed, their eyes red and puffy, offering bottles of milk and water to splash on their faces.