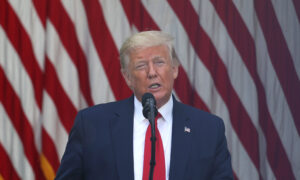 North Carolinas governor has one week to decide whether the Republican National Convention can fill to capacity, President Donald Trump said.

“I would say within a week that certainly we have to know,” Trump told reporters in Washington. [delete]

“Now, if he cant do it, if he feels that hes not going to do it, all he has to do is tell us, and then well have to pick another location. And I will tell you, a lot of locations want it.”

The convention is scheduled to start on Aug. 24.

Cooper and aides have repeatedly declined to make the promise, saying this stage of the COVID-19 pandemic wont let them.

“I will say that its okay for political conventions to be political, but pandemic response cannot be,” Cooper said at a press conference on Tuesday.

State officials asked the Republican National Committee (RNC) to submit proposals for safety plans for the convention, with the possibility it goes forward as planned but with limited capacity.

Its still early to commit to allowing the arena to fill to full capacity, Cooper said.

“Were talking about something thats going to happen three months from now, and we dont know what our situation is going to be regarding COVID-19 in North Carolina,” he said.

Coopers office didnt immediately respond to a request for comment.