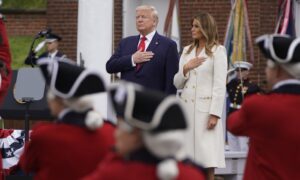 President Donald Trump participated in a ceremony at Arlington National Cemetery and visited Fort McHenry on Memorial Day, giving a speech at the latter that compared fighting the CCP (Chinese Communist Party) virus with war.

“In recent months, our nation and the world have been engaged in a new form of battle against an invisible enemy,” Trump said May 25 at Fort McHenry National Monument in Baltimore.

“Once more, the men and women of the United States military have answered the call to duty and raced into danger. Tens of thousands of service members and National Guardsmen are on the front lines of our war against this terrible virus, caring for patients, delivering critical supplies and working night and day to safeguard our citizens as one nation.”

The fort was the site of a battle during the Revolutionary War that inspired the writing of “The Star-Spangled Banner.”

Attendees at the ceremony were seated about six feet from each other in an attempt to follow social distancing guidelines meant to slow the spread of the CCP virus, which causes the disease COVID-19.

Trump told those assembled that he came “to pay tribute to the immortal souls who fought and died to keep us free.”

“Every time we sing our anthem—every time its rousing chorus swells our hearts with pride—we renew the eternal bonds of loyalty to our fallen heroes. We think of the soldiers who spent their final heroic moments on distant battlefields to keep us safe at home. We remember the young Americans who never got the chance to grow old but whose legacy will outlive us all,” he said.

Earlier on May 25, the president, first lady, and Cabinet members attended a wreath-laying event at Arlington National Cemetery in Virginia.

Following the playing of the “Star-Spangled Banner,” Trump stepped forward and followed a Memorial Day tradition by placing a wreath at the Tomb of the Unknown Soldier.

Officials didnt speak during the ceremony, since the cemetery is closed to the public because of the pandemic.

“Since the first shots fired in the Revolutionary War, Americans have answered the call to duty and given their lives in service to our Nation and its sacred founding ideals,” the president said in a proclamation.

“As we pay tribute to the lives and legacies of these patriots on Memorial Day, we also remember that they sacrificed to create a better, more peaceful future for our Nation and the world. We recommit to realizing that vision, honoring the service of so many who have placed love of country above all else.”