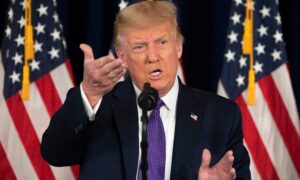 President Donald Trump on Saturday vouched for the postmaster general, who is facing criticism from Democrats over changes he implemented at the United States Postal Service (USPS).

In remarks to reporters on Aug. 15, Trump said Postmaster General Louis DeJoy is taking steps to stop the USPS from losing money rather than trying to hobble mail delivery in order to deter mail-in voting.

“The steps that hes taking are trying to stop the tremendous losses that have taken place for many many years. Hes trying to streamline the post office and make it great again,” Trump said.

Asked if he approved of the removal of mail sorting machines, Trump said: “I dont know what hes doing. I can only tell you hes a very smart man.”

The president said that the Democrats are holding up the funding for USPS by pushing for a pandemic relief package with a massive bailout for states.

DeJoy, who took over the reins of the postal service in June, announced earlier this month sweeping changes to the leadership structure of the organization as part of efforts “to operate in a more efficient and effective manner and better serve customers” amid concerns over the financial position of the agency.

“Our financial position is dire, stemming from substantial declines in mail volume, a broken business model, and a management strategy that has not adequately addressed these issues,” DeJoy told the USPS Board of Governors during an Aug. 7 meeting. “Without dramatic change, there is no end in sight, and we face an impending liquidity crisis.”

Since the beginning of the pandemic, Democrat lawmakers have been pushing for expanded mail-in voting. Trump and Republicans have vehemently opposed the idea, arguing that the USPS in its current state is ripe for voter fraud.

“Now they want to send in millions and million of ballots and you see whats happening. Theyre being lost. Theyre being discarded. Theyre finding them in piles. Its going to be a catastrophe,” Trump said on Saturday.

“Now, if we dont make a deal, that means they dont get the money,” Trump told Fox News. “That meRead More From Source
[contf]
[contfnew]