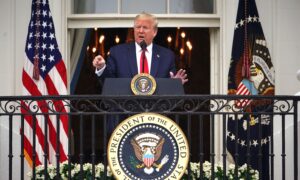 President Donald Trump on Friday said governors across the nation should let churches and other houses of worship reopen this weekend if they havent already done so.

“I call upon governors to allow our churches and places of worship to open right now,” Trump told reporters at the White House in Washington.

“The governors need to do the right thing and allow these very important, essential places of faith to open right now. For this weekend. If they do not do it, I will override the governors. In America we need more prayer, not less,” he said.

The Centers for Disease Control and Prevention is issuing guidance for communities of faith at Trumps direction.

“Its not right” that some governors have declared liquor stores and abortion clinics as essential but have left out churches and other houses of worship, according to the president, calling it an “injustice.”

Some governors have allowed in-person church services to resume while others have continued to bar such events. In some states, drive-in services have been taking place to comply with harsh restrictions implemented in an attempt to slow the spread of the CCP (Chinese Communist Party) virus.

Lawsuits filed by pastors, congregants, and others have challenged orders in multiple states after governors and other officials put stricter conditions on houses of worship than other places. Some have been successful. A federal judge on Tuesday gave churchgoers in North Carolina the go-ahead to resume indoor services with no limit after Democratic Gov. Roy Cooper tried limiting indoor gatherings to 10 or less people while letting most businesses fill to 50 percent occupancy.

“This court does not doubt that the Governor is acting in good faith to lessen the spread of COVID-19 and to protect North Carolinians. But restrictions inexplicably applied to one grouRead More From Source
[contf]
[contfnew]