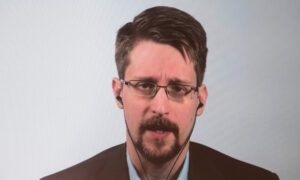 President Donald Trump told reporters on Saturday he is considering a pardon for Edward Snowden, the former National Security Agency (NSA) contractor who leaked a giant trove of U.S. national secrets in 2013.

“Im going to start looking at it,” Trump said at a news conference in Bedminster, New Jersey.

Snowden fled to Russia and was given asylum in 2013 after his leaks exposed a vast domestic and international surveillance operation carried out by the NSA. U.S. authorities have since sought to have Snowden return to face criminal espionage charges.

Snowdens attorney said the United States should not only pardon his client but drop all prosecutions since Snowden has not committed any crimes.

Shortly after media stories about Snowdens leaks emerged in 2013, Trump called him “a spy who should be executed.”

The president said on Aug. 15 he thinks Americans on both the political left and the right are divided on Snowden.

The Justice Department said Snowden published the book without submitting it to intelligence agencies for review, adding that speeches given by Snowden also violated nondisclosure agreements.

Snowden has previously said he is willing to return to the United States if the government would guarantee a fair trial.