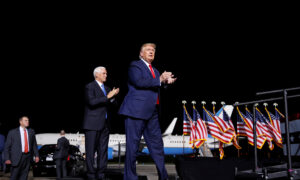 President Donald Trump on Friday said he wants a "friendly transition" of power if he loses to Democratic presidential nominee Joe Biden but told a rally that he won't lose the upcoming election unless his opposition cheats. "The only way that we're going to lose is if there's mischief. Mischief, and it will have to be on a big scale. So, be careful. We do want a very friendly transition, but we don't want to be cheated and be stupid and say: 'oh, let's transition,'" Trump said during an event in Newport News, Virginia. "We'll go and we'll do a transition, and we know thatRead More From Source
[contf]
[contfnew]