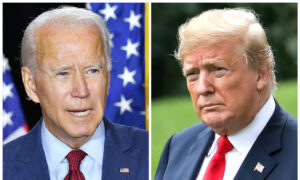 President Donald Trump and Democrat nominee Joe Biden on Friday brought their campaigns to the battleground state of Minnesota, laying out differing visions for job creation. The Trump campaign organized a large airport rally in Bemidji, while Biden met with a handful of labor leaders at the Jerry Alander Carpenter Training Center in Hermantown. Trump, who narrowly lost the state in 2016, stressed his signature policies of deregulation and reduced government intervention in the free market. “Were going to win Minnesota because they did nothing for Minnesota except close up that beautiful iron ore territory. They closed it with a pen. Do you remember that?Read More From Source
[contf]
[contfnew]