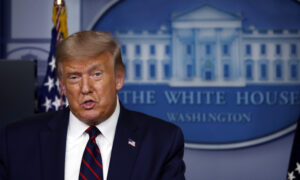 Trump administration officials stated on Friday that they plan to recommend that President Donald Trump take executive action on several stimulus provisions as talks between Democrats and Republicans falter.

Trump, meanwhile, wrote on Twitter around the same time that his administration will be “going a different way.”

House Speaker Nancy Pelosi (D-Calif.) and Senate Minority Leader Chuck Schumer (D-N.Y.) are “only interested in Bailout Money for poorly run Democrat cities and states. Nothing to do with China Virus!” the president said in reference to the COVID-19 pandemic. “Want one trillion dollars. No interest. We are going a different way!”

The $1 trillion in funding to state and local governments has been one of the main sticking points for White House officials. Trump later in a news conference in Bedminster, New Jersey, told reporters that the funding would be used for non-pandemic-related reasons, essentially providing a bailout to those locales.

Trump said that the executive order will be drafted “by the end of the week,” while suggesting that he will probably be sued again, likening the effort to his executive orders on constructing the southern border wall or the travel ban on several countries.

Earlier in the week, the president suggested that he would sign executive orders to continue unemployment insurance payments of $600 per week and a moratorium on evictions. The extra unemployment payments were authorized in the CARES Act, passed in March, but they—and the eviction moratorium—expired last month.

Left off the table in the executive order are the up to $1,200 stimulus payments and checks that were also sent out earlier this year.

Pelosi and Schumer both said Friday that they made a $2 trillion deal offer to the White House, but Mnuchin saRead More From Source
[contf]
[contfnew]