The image of hostile Russia has been invented by NATO generals and Western spin doctors for internal purposes and has little to do with reality, Russian Upper House chair has said at a recent political conference.

“NATO members think that the alliance guarantees their security, but their strategic mistake is in putting an equation mark between themselves and Europe. In a bloc-based security model, what provides security for one country inevitably becomes a threat for others and security on someone elses expense,” chair of the Federation Council Valentina Matviyenko said in her speech at the Primakov Readings international think tank.

“NATO is a relic from the bipolar period of history that by definition cannot survive without looking for opponents. Today they found this opponent in the so-called Russian threat and I would like to emphasize that the so-called hostile and revisionist Russia is not an objective reality but purely internal project of the West itself through which the West is trying to solve its own internal problems,” the official was quoted as saying by RIA Novosti.

The Russian parliamentarian noted that the new political setup in the world called for new rules of interaction between major centers of power, without any dictate or ideas of “civilization supremacy” and exceptionalism.

She also said that currently the information aspects of confrontation between nations are often shadowing the actual facts and described the situation as 'dangerous'.

“This is a dangerous process when the very reality is being tailored to fit all possible interpretations. There are specialists who can supply the necessary 'facts', 'pictures' and 'eyewitnesses accounts,' whole organizations that produce fakes in batches and conduct presumably independent investigations on the basis of pictures and videos found on the internet,” Matviyenko said. 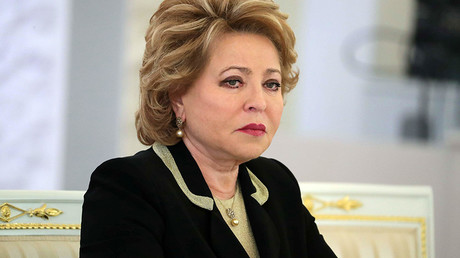 “Sometimes we are the last to know that we have allegedly committed an act of aggression against someone. Moreover, we cannot guess when Russia will launch its new alleged attacks,” she joked.

This is not the first time the Russian senator blamed the current crisis in international relations on Western attempts to maintain the dominant position in the world through the so called “export of democracy.”

In mid-2017, Matviyenko told the Parlamentskaya Gazeta daily that Western countries used various means of political and economic pressure; they launched color revolutions and even direct military invasions. "As far as the export of democracy is concerned, it only brings other peoples chaos, disasters and wars," she said.