The Conservative leader laid into politicians who saw power as being just about themselves — in what is likely to be seen as a dig at the floppy-haired former London mayor.

May also denied the charge that she's "no fun", and claimed she swigged Aperol Spritz on the plane home from a recent G20 summit.

Describing herself as an "unfashionable politician", she also admitted making mistakes in her handling of Brexit — likely to be her biggest legacy.

And she warned about the dangers of Labour leader Jeremy Corbyn becoming Prime Minister, saying it was her biggest fear.

The Prime Minister and MP for Maidenhead announced she was stepping down on June 7 in a tearful address outside 10 Downing Street, following disastrous local election results for the Tories. 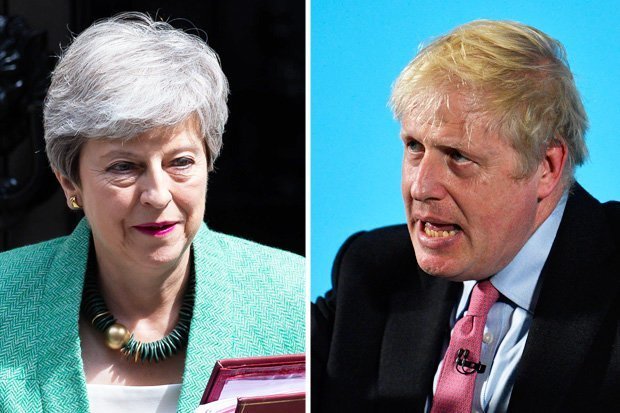 ATTACK: Theresa May has appeared to lay into Boris Johnson as she prepares to step down (Pic: GETTY/EPA)

SPAT: May had an uneasy relationship with her former Foreign Secretary Boris (Pic: GETTY)

She will officially resign as Prime Minister on July 24 when she goes to Buckingham Palace to speak to the Queen.

Speaking about her time as PM, May told the Daily Mail: "Too many people in politics think being Prime Minister is a position of power."

In what appeared to be a dig at Boris Johnson, she went on: "All too often, those who see it as a position of power see it as about themselves and not about the people they are serving.

"There is a real difference."

ANGRY: May said a male PM wouldn't have got the same coverage if he broke down (Pic: GETTY)

DIVIDED: The split in the country over Brexit is likely to be May's lasting legacy (Pic: GETTY)

She also hit back at her critics after she broke down in tears on the streets of Number 10 last month.

May said: "If a male Prime Minister's voice had broken up, it would have been said 'what great patriotism, they really love their country'.

"But if a female Prime Minister does it, it is 'why is she crying?'"

The 62-year-old – who has been an MP since 1997 – insisted she had done everything she could to get her Brexit deal over the line.

And addressing accusations she was robotic, she spoke about swigging Aperol Spritz while returningRead More – Source
[contf]
[contfnew]