Nobody, it seemed, had thought to look before.

When two Austrian scientists discovered last year that its likely most people have plastic inside their bodies, it wasnt because they had invented some new, complicated scientific method. It was because they were the first to check.

Their approach was simple. They asked eight people, mostly in Europe, but also in Japan and Russia, to keep a weeklong food diary. Then, they examined stool samples from their subjects, looking for plastic.

They found it in every single one: On average, 20 tiny pieces in each 10 grams of stool; given that humans poop on average 400 to 500 grams a day, that means their subjects were likely passing some 800 to 1,000 pieces of so-called microplastic daily.

The scientists, Philipp Schwabl, a researcher at the Medical University of Vienna, and Bettina Liebmann of Austrias environment agency, are the first to admit their findings are at best preliminary. Their results dont say where that plastic came from, what exactly it contains, and how — or whether — it is affecting our health.

The Great Pacific garbage patch; debris found in fish, turtles and whales; microscopic pieces within us — plastic, it seems, is literally everywhere.

The study is just now undergoing peer review, and much larger sample sizes will be needed to confirm its conclusions. But based on their results, the scientists estimate that more than half of the worlds population might have plastic passing through their bodies.

The study set off a wave of concern about the potential impact plastic could be having on humans, adding momentum to the transformation that plastic is undergoing in the public consciousness.

In its short history, plastic has gone from miracle material to a cause of mounting global concern. The Great Pacific garbage patch; debris found in fish, turtles and whales; microscopic pieces within us — plastic, it seems, is literally everywhere.

And as a substance, its turning out to be devilishly difficult to do something about. Plastic is cheap to produce, useful nearly everywhere and incredibly durable. These qualities make it nearly indispensable to large swathes of the modern economy, from packaging and fashion to medicine and transportation. They also make it a nightmare to regulate or dispose of. 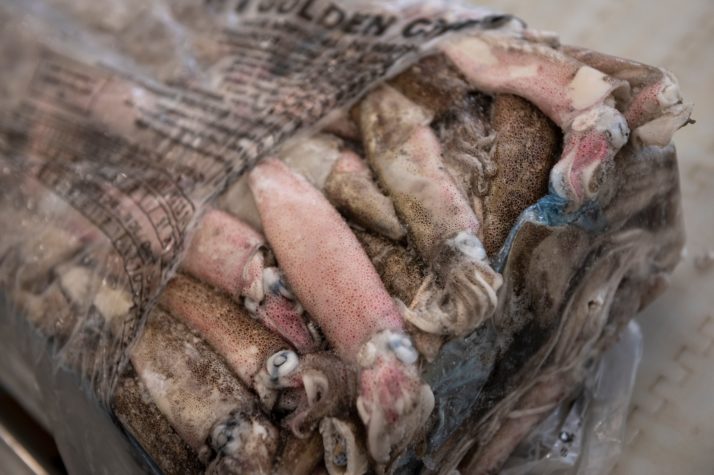 Plastics can lodge in the organs of fish, causing inflammation and physical damage | Miguel Riopa/AFP via Getty Images

At the same time, even if the science isnt yet clear about the effect plastics have on our bodies, worries are rapidly mounting.

“Were running this big human experiment on how they will affect us,” said Alice Bernard, a lawyer for environmental advocacy group ClientEarth. “It was not thought through at all.”

Its taken just over a century for plastics to become a ubiquitous part of our lives, our environment and perhaps even our bodies.

The first mass-produced plastic was invented in 1907, by Belgian-born scientist Leo Baekeland. In creating a hard, moldable material that would retain its shape after being heated, Baekeland opened a Pandoras box in reverse — a flurry of hope followed by microscopic mayhem.

The plastics boom began in earnest after World War II, when global production skyrocketed from 1.5 million tons annually in 1950 to 100 million tons in 1989. In 2017, nearly 350 million tons were being produced each year.

“In product after product, market after market, plastics challenged traditional materials and won,” wrote author Susan Freinkel in a book on the materials ubiquity. Plastics possibilities are near-endless: In its various forms it has replaced steel in cars, wood in furniture, paper and glass in packaging, and cotton in clothes.

It didnt take long for the material to move into the environment.

Although most plastics are derived from petroleum — an organic matter — the manufacturing process warps individual chemical units found in petroleum, helping them form extremely strong carbon bonds unlike anything produced in nature. Because of this uniqueness, the organisms that decompose organic matter dont know how to break down plastic.

This, combined with the fact that many plastic items are used once and thrown away, means the vast majority of the plastic that has been produced is still out there, somewhere. 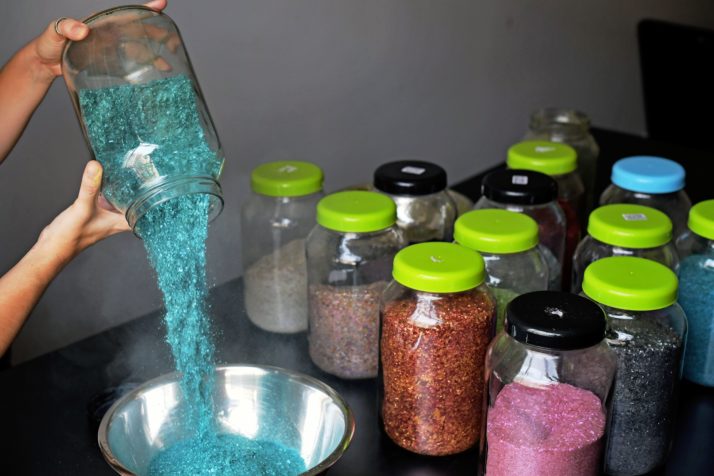 Some of the other 4.7 billion tons of plastic waste sits in landfills, little trash mountains piling up in every country in the world.

Some of it is floating in the oceans, contributing to island-sized patches of floating garbage accumulated by rotating ocean currents. The rest of it surrounds us in the form of microplastics, particles ranging in size from microscopic to 5 millimeters long.

The term microplastics was coined in 2004 by Richard Thompson, a professor of marine biology at Plymouth University. He noticed that groups trying to clean up plastic pollution on beaches were mainly looking for “trophy items” like tires and fishing nets. He decided to look a bit closer.

“We found small bits among the sand grains that looked like sand grains,” he said. “We confirmed that they were plastic.” 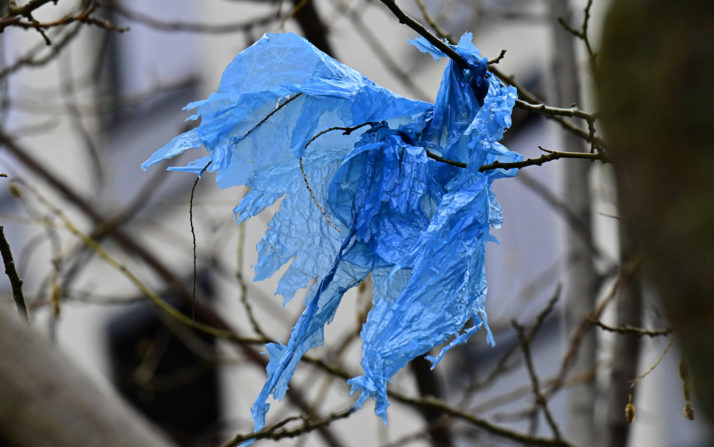 The microplastics varied in size and origin: Some were created at a very small size — think the little beads in exfoliating cosmetics or in fertilizers — but most of them are the result of bigger plastic items breaking down into smaller and smaller pieces, then slipping into the environment unnoticed. The two biggest sources of unintentionally released microplastics are wear from synthetic rubber tires and plastic fibers released from washing polyester or nylon clothes.

Thompsons research demonstrated that the amount of microscopic plastic on beaches has increased substantially since the 1960s. And he made another discovery. “We showed that a range of creatures can ingest that material,” he said.

In the years since, Thompsons findings have been confirmed over and over again. Microplastics have been found in nearly every fish and aquatic animal thats been tested.

Mussels in the coal mine

Now concern is growing about the effect of plastics on the human body, primarily informed by research that has been done on animal health.

Studies have found that sea birds, and marine animals like whales that filter-feed, can ingest so many microplastics that they accumulate in their digestive systems and block the ability to digest food. Others found that plastics can lodge in the organs of fish, causing inflammation and physical damage by jabbing and rubbing up against organ walls.

And beyond the mechanical problems caused by small pieces of non-biodegradable material stuck in organs, research has also shown that microplastics can act as a “vehicle” for some of the more harmful chemical additives in plastic, carrying them directly into the bodies of animals.

“They can soak up all these substances from other toxins, colorants and additives, and bring those into an organism,” said Frédérique Mongodin, a marine litter policy officer at the environmental NGO Seas at Risk.

This contamination from microplastics has been found in marine animals big and small, and its been linked to a host of problems, from inhibiting brain activity in tilapia fish to contributing to the early death of whales.

Plastic pollution does not have the known deadly effects that other environmental challenges do.

But while it may seem intuitive that its only a matter of time until negative effects are proven for humans too, most researchers are more cautious.

Plastic has been found in the guts of many commercially fished species, but since humans dont generally eat fish stomachs, scientists thought it was possible we werent digesting it. Plastic also shows up in a range of food products — from table salt to drinking water to beer — but until Schwabl and Liebmann started looking through fecal samples, nobody had showed it was present in our bodies in large quantities.

Some scientists wondered if seafood we eat whole, like mussels, could be carrying chemicals from plastics into our bodies, but they found were exposed to most of these from so many other places that microplastics from eating seafood is actually a negligible factor.

Schwabl and Liebmanns study has helped propel a new wave of research — partly because it left two important questions unanswered. 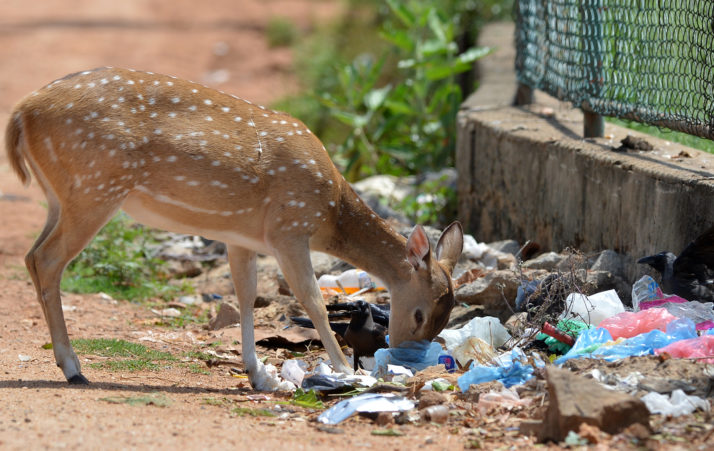 First, it cant say anything about where the plastic came from. “We showed it must have been swallowed,” Schwabl said. But thats it. The plastic could have been in something people ate or drank, or it could have migrated from materials in packaging or forks.

Second, it says nothing about whether the plastics in our guts are doing us any harm.

The gastrointestinal tract serves as a barrier between what we eat and our insides. Some who have looked at the study argue that as long as the plastics simply pass through our digestive system and are flushed out as waste, there may not be a problem. “And I second that opinion,” Schwabl said.

Funding is being doled out globally to research projects that are examining whether microplastics pose a risk to human health. But as scientists call for more research on human health impacts, some are also calling for the response to be proportional to the risk.

Plastic pollution does not have the known deadly effects that other environmental challenges do. Air pollution contributes to 7 million deaths annually, and climate change-related diseases could each year claim a quarter of a million lives. Plastic pollution has never been blamed for a single death.

Of the 11.7 million tons of microplastics estimated to enter the environment every year, only 3 million of them began as tiny particles.

“There is a big discrepancy between the magnitude of this debate and actual scientific findings, which have merely shown the presence of microplastics in certain products,” concluded Sinja Rist, a researcher from the Technical University of Denmark, in a critical look at the science of microplastics and human health. “The recent debate has created a skewed picture of human plastic exposure.”

Earlier this year, the EU advisory body Science Advice for Policy by European Academies (SAPEA) published a meta-analysis of all available studies on microplastics. Its conclusion: They “do not pose a widespread risk to humans or the environment, except in small pockets.”

However, it went on to say that the plastics may be harmful in some isolated locations that see them in high concentrations, and that concentrations of microplastics in the environment are increasing.Read More – Source
[contf]
[contfnew]