LONDON — Forget speaking the same language, neither side in the Brexit talks any longer believes what the other is saying.

Michel Barnier, the European Union’s chief Brexit negotiator, traveled to London Monday asking for clarity about the U.K.’s objectives, but left disappointed with a departing warning shot for Theresa May that time is running out for her to decide what Britain wants.

The day before the next phase of negotiations was due to start, the gap between the two sides exposed just how much must be resolved in the remaining 14 months before the U.K. leaves the European Union, despite agreement in December to move onto the second phase of talks.

In Brussels, EU officials told POLITICO before the meeting they do not believe the British prime minister will stick to her red line of Britain leaving the customs union.

Having folded on the Brexit bill in Phase 1, Brussels believes it is only a matter of time before May backs down again. To honor its commitment to an invisible border in Ireland, Brussels believes the U.K. will have to give way on customs.

But, if Brussels does not believe London, the feeling is mutual.

According to a senior U.K. government figure familiar with Monday’s tête-à-tête, Barnier was left in no doubt about the government’s determination to leave the customs union and seek a new arrangement that allows London to strike independent free-trade deals — including goods and services — after Brexit.

“The simple truth is we haven’t left any doubt,” the U.K. government figure said.

A message willfully lost in translation? “Yes,” said the insider.

Over the three hours the two sat down together, Barnier did not bring up the customs union, according to one insider familiar with the talks, but Davis made the position clear in his statement after the talks — saying the U.K. would be out of the customs union and single market “in the longer term.”

It was on Barnier’s previous sojourn to London last April that the gulf between London and Brussels’ expectations became acutely apparent.

To the EU27 this is a demand for a cherry-picked special deal that is not on the table. It calculates the U.K. won’t risk leaving the EU without agreeing a withdrawal treaty that provides an orderly exit, including a transition period needed to prevent what many fear would be a potentially major shock to the British economy.

But things look different from London. One senior U.K. official said Brussels was simply playing a game, ramping up pressure on Britain to change its position despite clear indications from the U.K. that this was not an option.

Monday’s exchange exposed the depth of division that still exists between the two sides as they gear up for a crucial period in the divorce talks. London and Brussels hope to reach a transition agreement in March before starting formal negotiations on the final exit package, planned to conclude by October, including a political statement on the outline of a future trade, foreign policy, defense and security relationship.

Talks on the transition deal begin on Tuesday and a key U.K. Cabinet sub-committee meeting Wednesday and Thursday will begin to thrash out what Britain’s negotiating position will be on a final deal.

It was on Barnier’s previous sojourn to London last April, when he dined with May and Davis, alongside Commission President Jean-Claude Juncker and his head of Cabinet Martin Selmayr, that the gulf between London and Brussels’ expectations became acutely apparent. Less than a month after May triggered Article 50, it led to officials briefing May was in “different galaxy” when it came to Brexit. 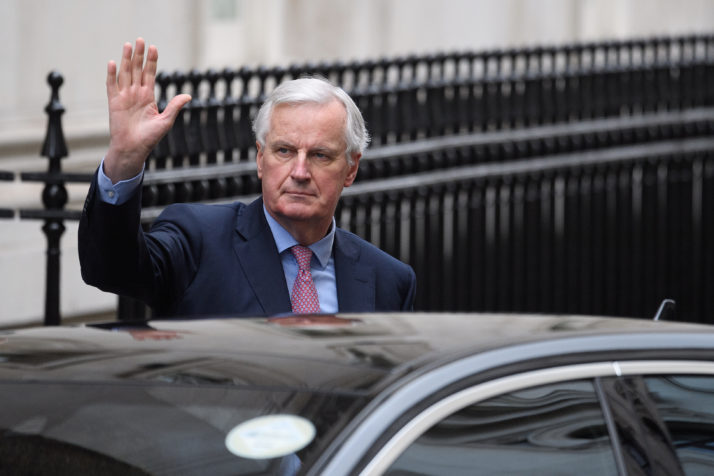 The two sides have moved closer to an accord since — reaching a holding agreement on withdrawal issues in December — and the atmosphere on Monday was cordial. May joined Barnier and Davis for a pre-lunch (non-alcoholic) drink in No. 10 Downing Street’s Terracotta Room.

Her official spokesman said she and Barnier discussed their shared pleasure at reaching December’s “joint report” agreement, and May thanked the EU’s chief negotiator for his role getting the talks over the line. They also agreed “it was in the interests of both sides to move quickly on the implementation period and to agree a positive future relationship,” the spokesman said.

In that spirit of haste, Commission officials are expected, as early as Tuesday, to adopt the draft text of a chapter of the withdrawal agreement on transition, according to two EU officials. That will truncate the process and allow transition talks to proceed on the basis of discussions of a legal text.

This text will be incorporated into the withdrawal agreement that the U.K. and EU agree on at the end of the negotiations this fall.

In Brussels, officials have been waiting for months — naively, perhaps — for the U.K. to change its position

But having heard what the U.K. government’s does not want, Barnier rose from the table apparently none the wiser as to what the U.K. does want.

“We need … clarity about the U.K. proposals for the future partnership,” he told reporters afterward. “The only thing I can say: Without a customs union and outside the single market, barriers to trade in goods and services are unavoidable. [The] time has come to make [a] choice.”

In Brussels, officials have been waiting for months — naively, perhaps — for the U.K. to change its position on leaving the EU customs union, believing that it was only a matter of time before London recognized the clear self-interest in avoiding any reinstatement of trade barriers.

It is precisely the issue of staying in the customs union that EU officials and EU27 diplomats refer to when they complain, for instance, that the U.K. has been too vague about its goals for the future relationship.

But while EU negotiators are more than eager to help broker an arrangement that would keep Britain in the customs union, officials in Brussels are also keenly aware there is little they can do to help May with her domestic political problems, and the pressure from pro-Brexit Tories they believe is the main obstacle to a customs deal.

EU officials are reluctant to push her too hard for fear that her government could collapse, even as they grow increasingly anxious with each passing week about not having enough time to complete a withdrawal treaty. 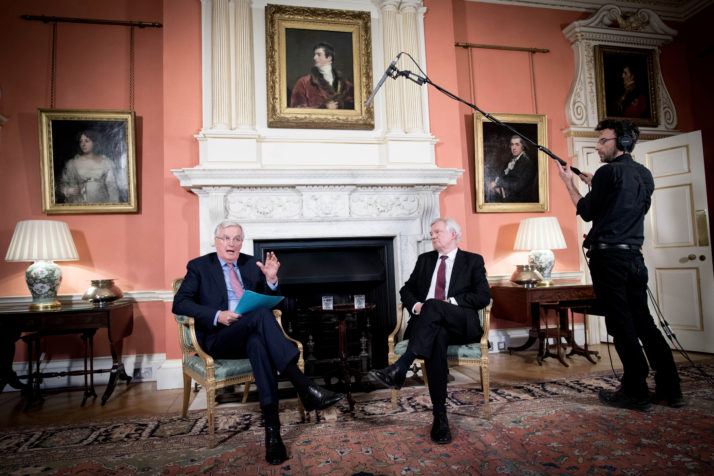 “One of the key aspects of this moment is that May is too weak and nobody here wants to be blamed if things in London go wrong,” said one senior EU diplomat working on Brexit.

At the same time, Brussels’ patience — like the time on the two-year Article 50 clock — is running out fast. While officials are sympathetic to the fact that May has pro-Brexit Tories “on her neck,” they are also adamant about needing a clearer picture of where things are headed before approving a transition deal.

“None from the 27 will engage in a meaningful transition agreement without knowing where we are transitioning to,” one EU official said.