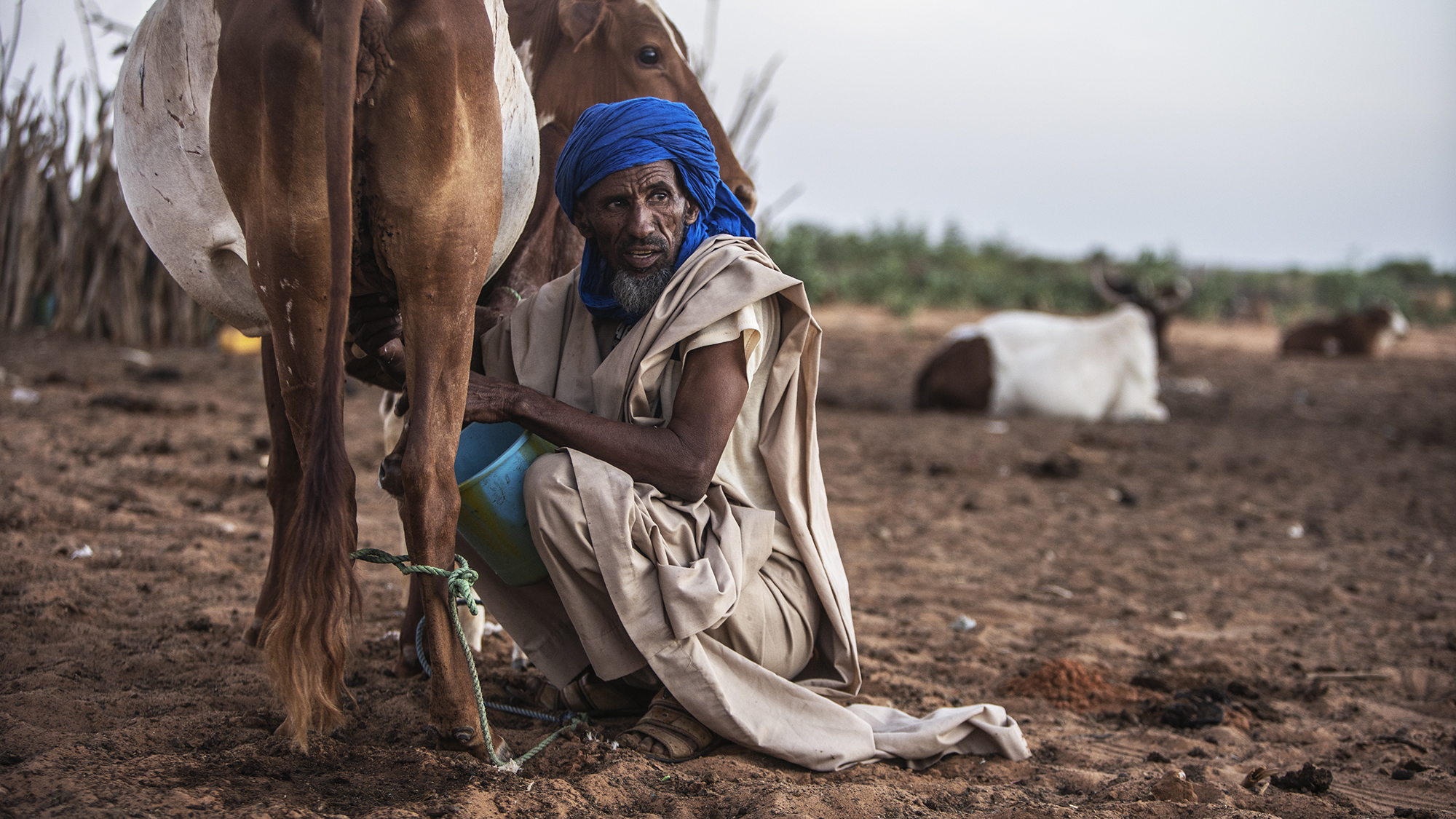 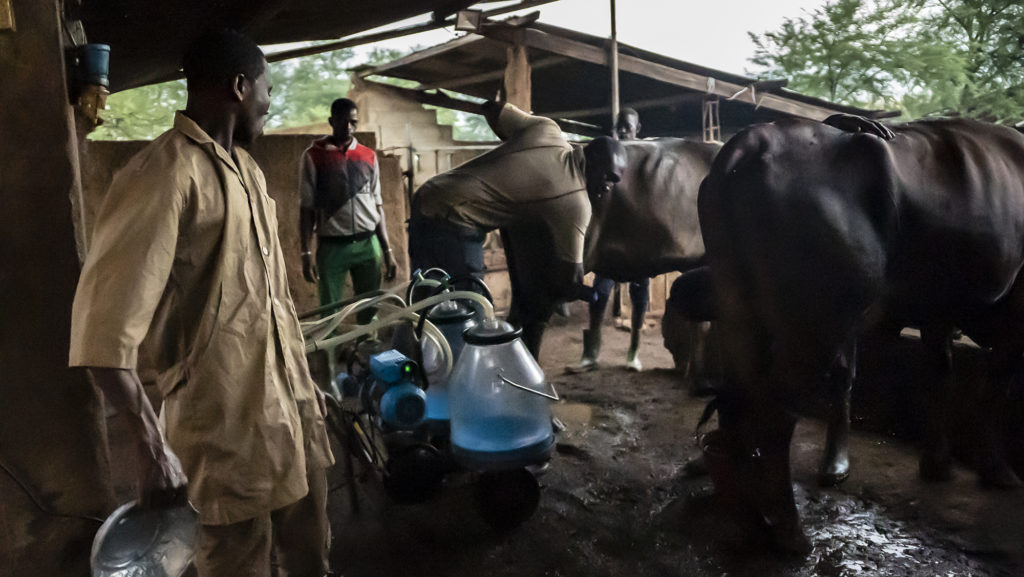 Hamidou Bandé, president of Burkina Fasos National Herders Association, at a market in Ouagadougou in October | Simon Marks for POLITICO

OUAGADOUGOU, Burkina Faso — When Hamidou Bandé was growing up in rural Burkina Faso in the late 1970s, the idea of drinking foreign milk was unheard of. School children would gulp down the fresh produce of nomadic herders during their mid-morning break. His father sold milk from the family herd to local creameries at a fast clip.

Today, not a single drop from his stock of more than 300 cows is consumed locally. His animals are sold for meat to neighboring countries and sometimes he pours his milk into the soil.

Bandés experience is far from unique. The local industry says that European producers use West African markets to offload gallons of a lower quality product derived from constituents of cows milk that they are unable to sell in the EU. This cheap milk lookalike is bulked up with vegetable fats including palm oil. Its low cost and ubiquity make it impossible to compete, say local livestock farmers, leading to a spiral of economic decline. 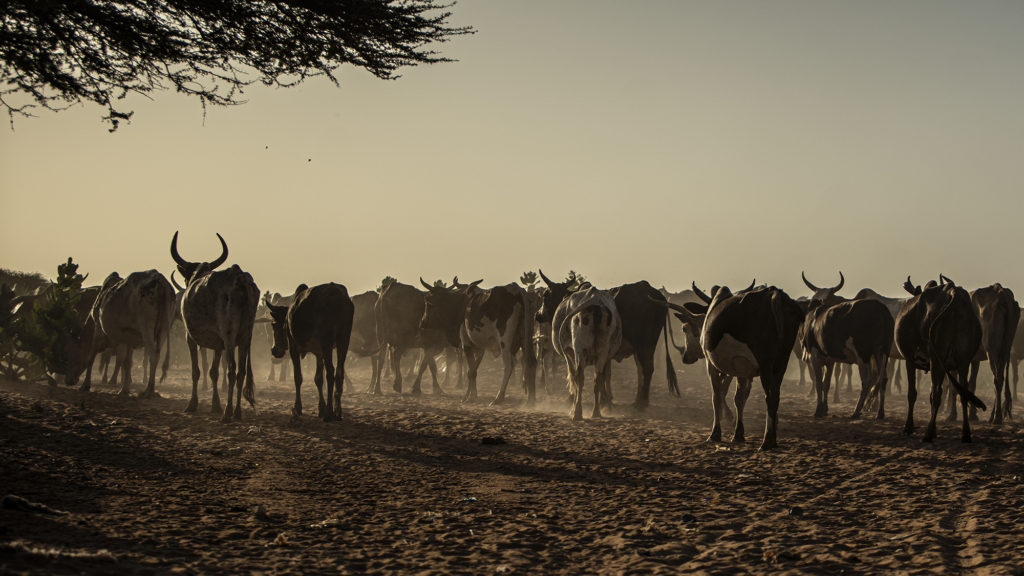 A herd of dairy grazes on land outside the Mbera refugee camp in Mauritania. Security is tight around the perimeter and local police forces keep an eye out for intruders. | Simon Marks for POLITICO

“Ive tried selling my milk, but most of the time it goes to waste and ends up being poured away,” said Bandé, a towering man in long white robes who is president of Burkina Fasos National Herders Union. “It hurts. The milk we throw away could have been for the calves or our children.”

In reporting conducted over six months in Burkina Faso, Mali, Mauritania and Senegal, POLITICO has investigated the devastating impact that imports of so-called fat-filled milk powder — the technical name for the mash-up of milk constituents and vegetable oil — have had on those countries dairy industries and the knock-on effects on societies.

West African milk producers see the hybrid product as the driving force behind their dairy sectors woes. Whats more, government officials, small-scale dairy owners and livestock farmers in West Africa argue the ersatz product is nutritionally inferior and environmentally damaging. The palm oil it contains comes typically from plantations in Malaysia and Indonesia — the root cause of deforestation and species loss there.

The challenges for the millions of West African nomadic herdsmen whose animals have grazed the pastures of the Sahel for centuries are many. Climate change has forced many to search farther afield for water, and rampant insecurity across huge swaths of the region has displaced hundreds of thousands of people and ravaged economies. African cows are also less productive than in Europe, making just 4 liters of milk a day during the rainy season, compared with 28 liters in Europe.

But the local dairy industry has come under increasing pressure since Burkina Faso and its neighbors opened their markets to Europe under a series of trade agreements that stretch back almost two decades. 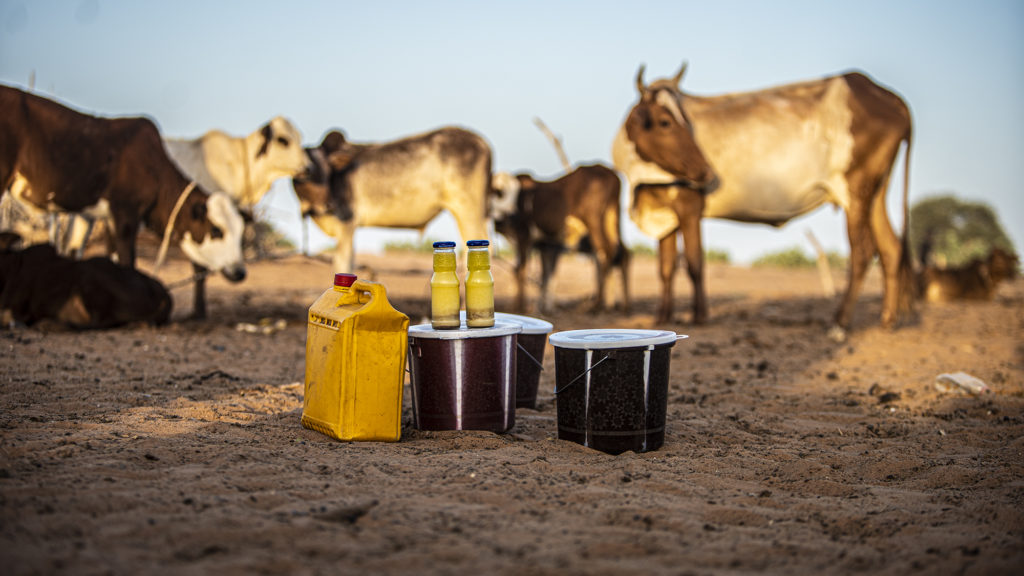 Homemade butter stands on buckets of fresh milk at the Mbera refugee camp in Mauritania. Hundreds of Tuareg herders from Mali have found safety here after fleeing violence in their home country. | Simon Marks for POLITICO

While countries use high tariffs to protect products like fresh milk and cheese because of the vast subsidies received by European farmers through the EUs Common Agricultural Policy, they have not done so for milk powder and concentrated milk. These benefit from a low 5 percent tariff because they are considered by governments in the region as a necessity for less advantaged people and children.

Local producers say that has created a back door that allows the cheaper imitation milk to enter the market. Pioneered by Irish dairy conglomerates such as Ornua and Lakeland at the beginning of the millennium, fat-filled powder was the answer for butter manufacturers searching for a market for the protein-rich whey that they are left with after extracting the fat from milk for their primary product. In order to avoid the expensive process of discarding thousands of tons of whey, companies found that they could reproduce a milk-like substance by adding palm oil and other vegetable derivatives such as rapeseed oil.

Although not a success with European consumers, Africa was an ideal market thanks to the lower purchasing power of its citizens and the growing populations in countries such as Nigeria, Niger and Senegal. Europe also sells the product to countries in the Middle East and Asia. 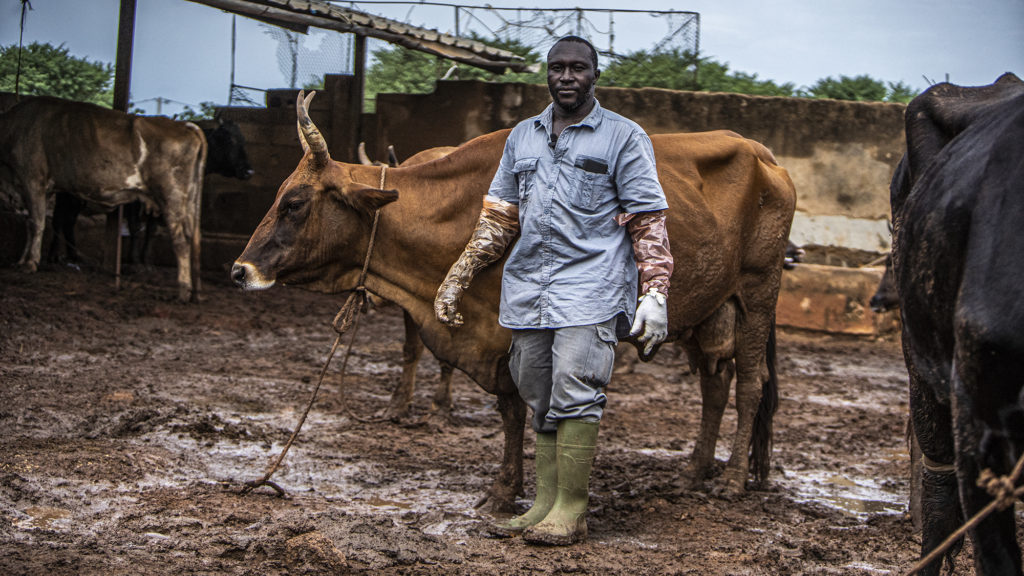 Sommanogo Koutou, Burkina Fasos minister of animal resources, said the imports had a significant impact. “[Its] a paradox that we live in a country of livestock farmers and there is not that much dairy production.”

He said the government had tried to boost local farmers with policies such as improving the quality of animal feed in the livestock sector and helping farmers breed genetically more productive and resistant herds. And he questioned whether fat-filled powder is as healthy as real milk.

“Its a milk that is flooding our schools and is very unhealthy for our children,” he told POLITICO.

Others say the product is almost impossible to avoid. “Most of the milk consumed here contains vegetable fats,” said Ilahda Ag Mohammed, 51, a Tuareg herder from the town of Léré in Mali, who fled his hometown after rebel groups took hold of his community in 2012 and now lives in a U.N.-sponsored refugee camp in Mauritania close to the town of Mbera. “If you ask me, its not the kind of milk that I would drink,” he said. 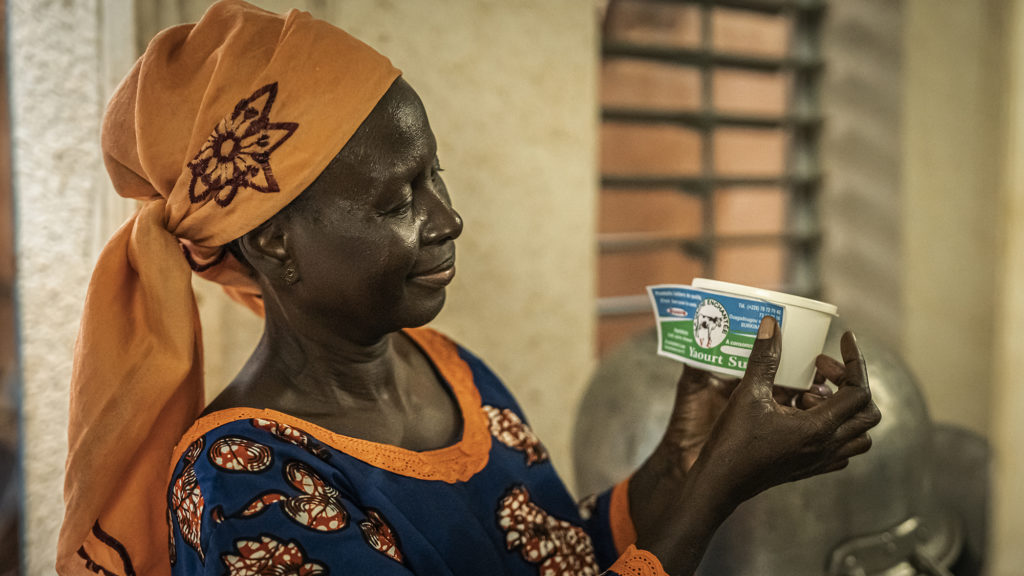 Halimata Sanne places a label on a pot of yogurt at her small-scale dairy in Ouagadougou. She wants the government to place duties on imported milk. “Local milk has a good taste. We can taste the cream inside,” she said. “I can tell the difference with powdered milk straight away. We dont know how its been made.” | Simon Marks for POLITICO

Supermarkets in Ghana, Senegal, Burkina Faso and Mauritania visited for this story contained long aisles of fat-filled milk powders, some marketed to children as young as one.

Trade data underlines Europes dominance in the sector. The EU is the largest producer of cows milk in the world at 145 million tons in 2018, followed by the United States, which made 99 million tons and India, which produced 76 million tons in the same year.

Production was enhanced in 2016 after the blocs quota system was abolished. Exports of fat-filled powder rose to 276,892 tons per year in 2018, a 234 percent increase in 10 years, according to the European Milk Board, a trade body for dairy producers in 16 countries. 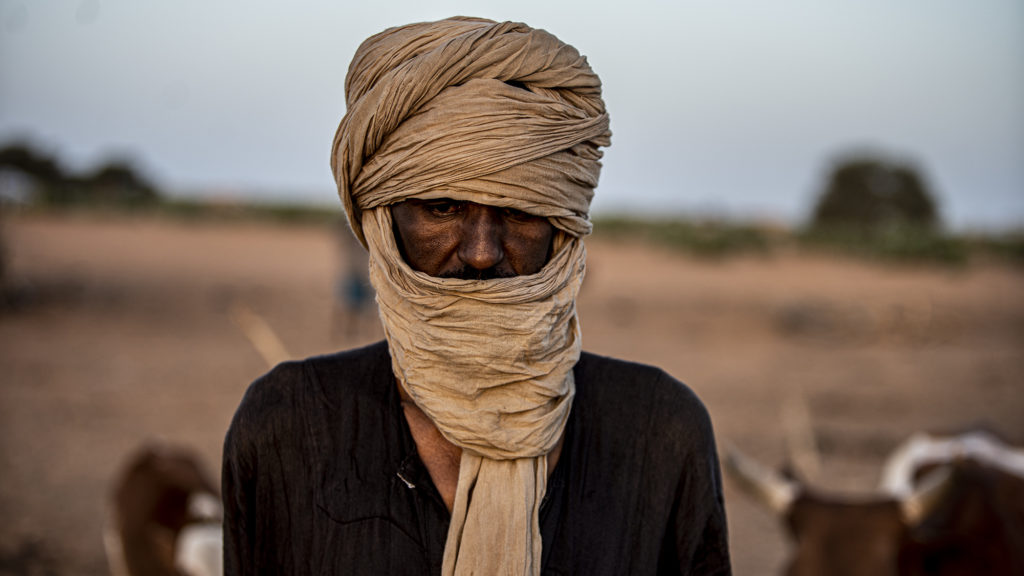 According to EU data, exports of “food preparation products” to Burkina Faso (the vast majority of which trade experts say is fat-filled powder) increased from 1,529 tons in 2009 to 8,176 tons a decade later. Senegal imported roughly 85,981 tons of the product last year compared with 65,529 tonnes in 2017. And the amount of fat-filled powder entering Nigeria has quadrupled in the last 17 years, reaching 94,464 tons last year. Companies from New Zealand, the U.S. and elsewhere also export fat-filled powder to West Africa but at a lower rate.

Europes milk exporters argue that Africa simply does not possess the levels of investment and production required to meet the needs of the fast-growing populations in the region. They also dRead More – Source
[contf]
[contfnew]