The ruling on nationwide blocking of Telegram Messenger has not come into force because it is being ..

The ruling on nationwide blocking of Telegram Messenger has not come into force because it is being appealed by the app's lawyers, the press service of the Moscow City Court reports.

Earlier on Tuesday, Russian mass media, quoting a message on the courts web-site, reported that the decision to block the software on Russian territory, due to the companys refusal to hand over encryption keys to security services, had come into force.

The head of the Moscow City Courts press service, Ulyana Solopova, told reporters that the message was posted automatically due to a mistake and will soon be deleted.

“There was an appeal, we wait for all defects to be removed, the ruling has not come into force. The message that appeared on the courts web-site automatically will be removed,” she said.

Last week, the Moscow City Court accepted the Telegram lawyers appeal of the order to block the messaging service which was passed by the Tagansky District Court in Moscow on April 13. The court, however, noted that the appeal contained some mistakes and gave the defense team until June 4 to correct them.

In mid-April, the Russian telecommunications watchdog Roskomnadzor issued an order to internet providers restricting access to web resources used by Telegram Messenger. Russian law requires that owners of internet companies keep records of their clients traffic and hand over encryption keys to security officers on demand. 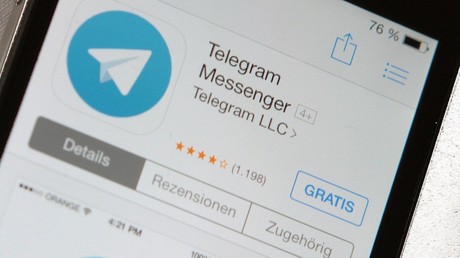 Telegram representatives insist that handing over of the encryption keys is technically impossible and refuse to comply with the law. Since the start of the procedure, Roskomnadzor blocked millions of IP addresses that were used by the Telegram Messenger, but it continues to migrate to new ones and remains accessible to this day.

However, the blocking of IP addresses has led to numerous problems with access to various Russian and foreign internet services all over the country. The situation became the subject of many jokes on the internet and lawsuits from businessmen who claim that they have suffered material losses as their companies websites became collateral damage in the Telergam-Roskomnadzor standoff.

In late April over 7,000 people rallied in central Moscow in support of Telegram. The event, organized by a group of activists, was approved by Moscow authorities and went through peacefully and without major incidents.