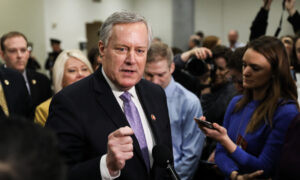 Mark Meadows, the White House chief of staff, said negotiations between the Trump administration and both chambers of Congress will start Monday on stimulus legislation, setting up the possibility for another round of direct stimulus checks, expanded unemployment insurance, and small business safeguards.

“As weve started to engage with our Senate and House colleagues up on Capitol Hill, those will start in earnest starting tomorrow, Monday,” Meadows said in an interview on Sunday, adding that the meetings will occur on July 20 with “earnest” discussions.

The specifics of the bill proposed by the GOP are expected to be revealed later this week. Congress is operating on a tight deadline to negotiate the passage of the bill as the next break starts in early August, while expanded $600-per-week unemployment insurance ends in late July.

In the interview, Meadows said the White House has a set of priorities for the next package, including “protections for the American workers and those that employ individuals.”

Republicans like McConnell have expressed an unwillingness to keep the expanded unemployment insurance payments, saying they create a disincentive for people to return to work or find another job that pays better.

“Whether its a payroll tax deduction, whether its making sure that unemployment benefits continue without a disincentive to return to work,” Meadows added, saying it appears the bill will be above $1 trillion dollars. The previous CARES Act cost $2.2 trillion, while House Democrats HEROES Act would be worth about $3 trillion.

Democrats have pushed to keep the extra benefits until start of next year.

The CARES Act was passed in March—authorizing direct payments of up to $1,200 and the expanded unemployment payments—to offset potential economic losses suffered due to the CCP (Chinese Communist Party) virus pandemic and as governors had implemented sRead More From Source
[contf]
[contfnew]