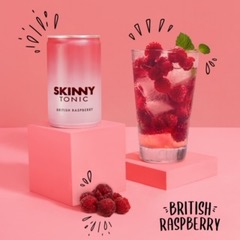 Skinny Tonic (PRIVATE:SKTON), the company behind the first zero-calorie, zero sugar, and 100% natural mixer to launch nationwide in the UK, said it continues to see its sales rocket and has launched a new British Raspberry tonic to capture the summer fizz market.

With sales up 1,734% so far in May and recurring order subscription customers increasing by 850% in the month, Skinny Tonic has created the new flavour to reflect the exceptional demand from consumers.

The group said the new brand blends the soft bitterness of quinine with succulent British raspberries and Staffordshire spring water to create a new tonic water still with zero calories, zero sugar and nothing artificial added.

Steve Wilkinson, the privately-owned groups COO commented: 'With the market research feedback and taste trials we have conducted we are confident British Raspberry will go straight in as one of our best-selling tonics.

“This screams summer and blends beautifully with all gins or as part of a berry cocktail or mocktail. Its also delicious on its own, simply poured over ice.”