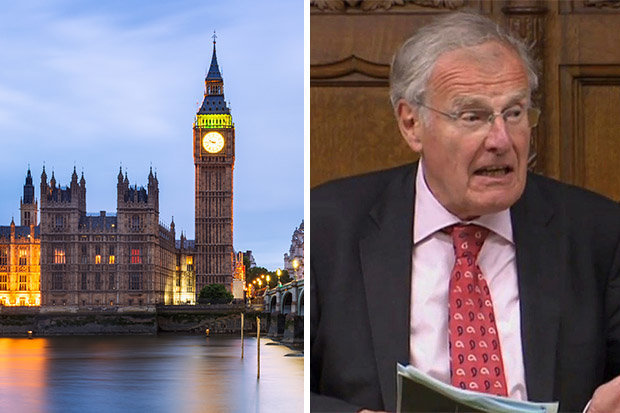 Sir Christopher Chope dealt a blow to campaigners after announcing he objected to the Voyeurism (Offences) Bill that would make it illegal for offenders to take a picture under someone's clothing without their consent.

It was the crucial backing campaigners – including ing victim Gina Martin, 26, and her legion of famous supporters – were hoping for after months of meetings with the Ministry of Justice to thrash out terms for suitable legislation.

But the Bill was scuppered by veteran Christchurch MP Sir Christopher, despite the best efforts of Ms Hobhouse to get him on side from the backbenches earlier in the session.

It means the Bill will have to return for another Friday Private Members Bill session, on July 6, if it is to have any hope of becoming law in this Parliamentary term.

Even then, it would only take one dissenting voice to again put a stop to its progress.

Home Office minister Victoria Atkins, also minister for women, and Tory MP Will Quince (Colchester) were among those who said "shame" when the Bill was blocked.

In a statement, campaigner Ms Martin said she had spoken to Sir Christopher, who agreed to discuss the Bill with her.

She said: "I am obviously extremely upset and disappointed that Sir (Christopher) Chope decided to object on this vitally important Bill for the women of England and Wales.

"I remain positive, though. We knew this was a risk – but I now stand with powerful, passionate women and men behind me, and I am confident that (junior minister) Lucy Frazer is committed to – and will – close this gap in the law.

"I'm positive and hopeful that he (Sir Christopher) will become a supporter."

A Government spokesman said: "This behaviour is a hideous invasion of privacy which leaves victims feeling degraded and distressed.

"It cannot be tolerated, so it is absolutely right that the Government supports this Bill to make 'upskirting' a specific offence.

"Whilst we are disappointed this Bill did not pass second reading today, we look forward to supporting these measures through the House at the earliest possible opportunity."

"Labour have supported this campaign from the start, it's time for the Government to bring legislation and not rely on Private Members Bills, which their own MPs have undermined."