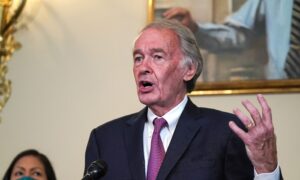 A longtime Democratic senator on Friday vowed to try to stop President Donald Trump's Supreme Court nominee from being confirmed. Trump plans on announcing his nomination on Saturday in Washington. The nominee is widely expected to be federal judge Amy Coney Barrett. Sen. Ed Markey (D-Mass.), who recently emerged from a contested primary, claimed that Barrett is an extremist judge "whose vote on the Supreme Court will put at risk the fundamental rights sacred to our democracy." "Her record as a judge and her own words establish that she will be a clear and present danger to reproductive rights, LGBTQ rights, labor rights, voting rightsRead More From Source
[contf]
[contfnew]