A senior MP representing parliamentary majority party United Russia says he and his cohort support a Polish law banning the propaganda of WWII Ukrainian nationalism and denial of ethnic cleansing of Poles during the conflict.

“The Polish people have suffered through all horrors of Nazism and paid with thousands of innocent lives. The legislative decision of their senate reflects the opinion of Polish citizens who don’t want to see a repetition of the Second World War tragedy and who protest over the resurrection of Nazism in neighboring Ukraine,” the deputy secretary of United Russia’s General Council, MP Sergey Zheleznyak, stated on the party’s website on Friday.

Zheleznyak also noted that in Russia all attempts to propagate or justify Nazism were punished as crimes and all memory of the victims of Nazi crimes was honored as sacred, regardless of their ethnicity or nationality.

“We are watching with indignation how Nazis are feeling free in Ukraine and practically impose their will on the Kiev regime, launch bloody acts of genocide and actively participate in the war against the people of Donbass,” he stated.

“The Polish parliament has shown its wisdom and responsibility before its voters, as well as giving an example to other Western politicians as to how any manifestations of Nazism should be countered,” the Russian lawmaker concluded.

The comment came after earlier this week the Polish Republic’s Senate approved a bill that outlaws blaming Poles for the atrocities committed in WWII death camps on Polish soil, or even using the phrase ‘Polish death camp’. It also forbids public denial of atrocities committed by Ukrainian nationalists against ethnic poles, in particular the so-called Vohlynia massacre. 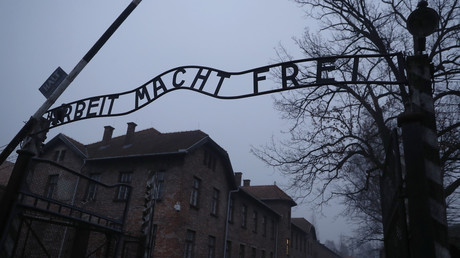 The maximum punishment for violating the ban is set as three years behind bars. To become law, the motion now needs only to be signed by Polish President Andrzej Duda.

Ukraine's Foreign Ministry has accused Poland of politicizing history and promoting a “one-sided interpretation of historic events.” Noting that Ukrainians, on par with Poles, have been victims of “totalitarian regimes,” the ministry blasted what it labeled as “attempts to portray Ukrainians exclusively as 'criminal nationalists' and 'collaborators' with the Third Reich.”

Lawmakers from the Ukrainian nationalist Svoboda (Freedom) party went as far as to demand the sacking of Foreign Minister Pavel Klimkin because of his inability to stop Poland from adopting the motion.