A court in the Russian Far East region of Sakhalin has sentenced former Governor Aleksandr Khoroshav..

A court in the Russian Far East region of Sakhalin has sentenced former Governor Aleksandr Khoroshavin to 13 years in prison for running a ring that brought in over half a billion rubles in bribes for him.

Apart from the sentence, to be served in a maximum-security prison, the court ordered the ex-governor to pay a fine of 500 million rubles ($8.6 million) and banned him from assuming any official posts for five years after the sentence is served.

The announcement of the sentence took the judge several days. Other suspects in the case – the former adviser to the governor, the ex-deputy chairman of the regional government, and the former Sakhalin minister of agriculture and trade – were also convicted of corruption crimes and received lengthy prison sentences and multi-million-ruble fines.

Prosecutors said they were satisfied with the sentence, while the defense team claimed the conviction was a foregone conclusion. They intend to appeal the verdict.

Khoroshavin and other former officials of the Sakhalin regional administration were arrested in March 2015 and taken to Moscow for investigation. Searches in their homes and apartments yielded around $17 million in cash (in various currencies), expensive jewelry, and a collection of watches worth over $10 million. In addition, investigators said they confiscated around $2 billion in assets that belonged to the ex-governor. 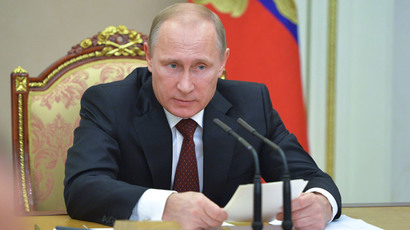 Soon after the arrest, Khoroshavin was sacked due to lack of trust. At the trial, the ex-governor was charged with receiving a $5.6-million bribe for his role in the inclusion of a local energy corporation in a federal investment program. Further investigation uncovered additional episodes of bribery that brought the sum to 522 million rubles. Other suspects faced charges of bribery and money laundering.

After the court sentenced the former Sakhalin officials, the spokesperson for Russia’s top investigative body – the Investigative Committee – revealed additional details about the property seized from Khoroshavin. “Apparently, the [former] governor had a great need in expensive watches. He had 195 in his collection for a total price of 602 million rubles ($10.4 million),” Svetlana Petrenko told reporters. She added that the most expensive piece from the collection cost $700,000 and that shortly before his arrest in 2015, Khoroshavin had ordered a watch for 36 million rubles.

Petrenko also said that a “significant part” of Khoroshavin’s assets were not properly declared and the court impounded and later confiscated a home, four city apartments, six cars, including a Mercedes limo, two Lexuses and two Bentleys, and numerous pieces of jewelry and expensive watches.