The Business Russia association has suggested an amendment to the anti-sanctions bill with a paragraph that would allow people or companies who suffer losses due to sanctions to seek compensation from those who comply with them.

The head of the Business Russia association, Aleksey Repnik, addressed the State Duma speaker Vyacheslav Volodin with a letter in which he criticized the current counter-sanctions draft that orders fines of up to 600,000 rubles (about $9,600) or up to four years in prison for those who damage the interests of the Russian state, companies or ordinary citizens by fulfilling the anti-Russian sanctions imposed by foreign nations.

In the letter quoted by RIA Novosti, Repnik wrote that he and other members of his lobby group that think, in its current form, the bill might put “unjustifiable, excessive strain” on Russian law enforcement agencies and courts and also that it might increase corruption because it uses loose definitions that can be interpreted to put pressure on entrepreneurs.

The Business Russia leader went on to propose an amendment to the Russian Civil Code that would directly allow Russian companies and citizens to seek compensation for damages (including moral ones) caused by “action or inaction” of a third party that fulfills the foreign orders concerning anti-Russian sanctions.

Repnik also wrote that he and his colleagues considered it necessary to give additional powers to Russian prosecutors that would allow them to protect citizens and companies who sustain damages as a result of unfriendly actions of foreign states. 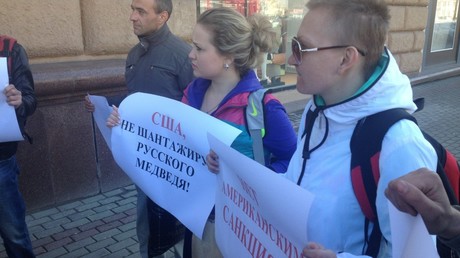 At the same time, the association agreed that it was right to introduce criminal responsibility for any premeditated action that helps foreign sanctions against Russia. The bill on punishment for those who observe foreign sanctions imposed on Russia, its citizens and companies was passed by the State Duma in the first reading on May 15. The second hearing was initially scheduled for May 18, but the numerous objections forced the lawmakers to have it postponed.

Among those who opposed the bill in its initial form were the Russian Union of Industrialists and Entrepreneurs, the lobby group Support of Russia, the presidential council for human rights and the center for the protection of mass media.

The critics said that the bill was putting Russian businessmen between a rock and a hard place – violating the Western sanctions law would lead to prosecution abroad and compliance with them would cause prosecution in Russia. They also noted that the terms and definitions used in the draft were so broad that they allowed for prosecution of reporters whose articles were used by foreign officials in preparing the anti-Russian restrictions.