Russia’s deputy foreign minister says the only reason behind the so-called ‘Kremlin List’ was a desire by the US to pressure Russia. He added that the planned reciprocal action would be asymmetrical.

“We have said it before and we are saying now that there can be only one political explanation for everything that is going on and this is Washington’s desire to pressure Russia. Therefore, in this situation we are not pursuing exact mirror-like reciprocity and we will not act in a way that could harm ourselves,” Sergey Ryabkov said in an interview published on Monday in Izvestia daily. He was answering a question about plans to respond to the Kremlin List’s release by the US Treasury Department.

“We will answer when and if our president and other senior officials estimate the complexity of factors and come to the conclusion that the moment has come,” he added.

Ryabkov emphasized that the Russian authorities have already repeatedly replied to the unfriendly actions of the United States, both through expanding Russian sanctions lists and other measures. In particular, he mentioned the suspension of three nuclear-related treaties between Moscow and Washington, which has been officially described as a reply to the “non-friendly and practically-hostile policies” of the US side. 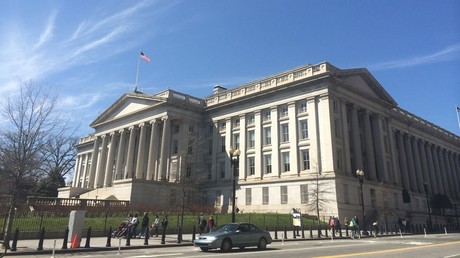 At the end of January, the US authorities released the non-classified part of a report listing Russian officials and businessmen who could potentially be targeted by new sanctions. The report – dubbed the Kremlin List – includes 210 people, including the entire government and people who are on the Forbes list of billionaires.

However, the list does not include President Vladimir Putin, who has already joked that that his absence from the list is a bit sad.

Despite saying that the action by the US Treasury is in a certain way “unprecedented” and clearly casts shadow on the already-strained ties with Washington, Putin stressed that both he and Russia have better things to worry about.

“We should think more about ourselves, work on our economy, agriculture, support exports, education, and then a sudden realization will strike that there’s no sense in making any threats or lists. That’s what we should do, going by the well-known adage: ‘The dogs bark, but the caravan moves on,’” the president stated.