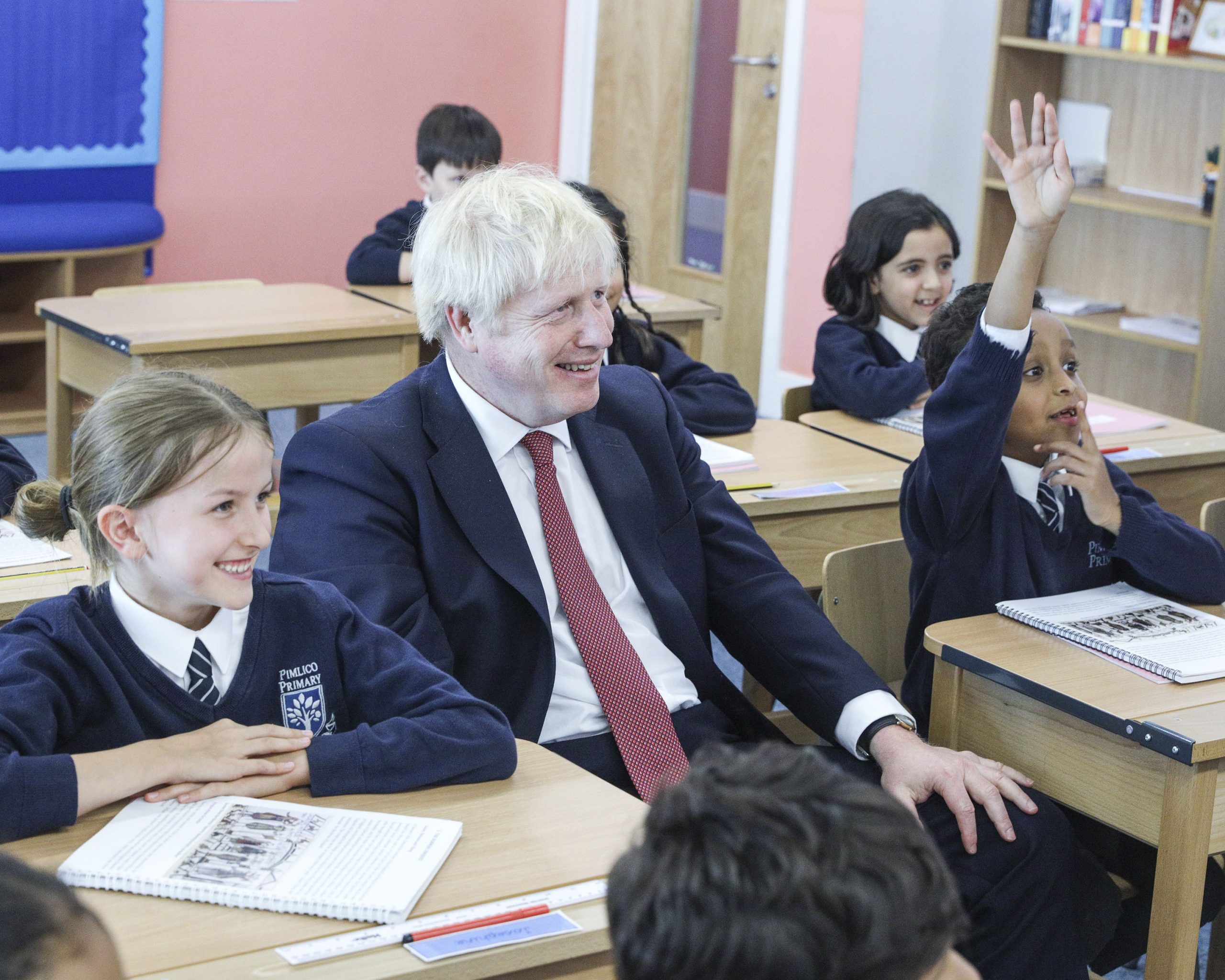 RM Plc (LON:RM.) shares climbed 4.1% to 253p after it said trading had started to improve as the education systems start to reopen.

The information technology firm focused on the educational sector said it had got off to a positive start to 2020 but then operations were knocked for six by the coronavirus outbreak in the second quarter.

“As education systems start to reopen, we are seeing trading improve and RM will look to play a key role in helping our customers' transition to new ways of working,” said David Brooks, the chief executive of RM.

2.30pm: Nothing to boohoo about at Sosandar

Sosandar PLC (LON:SOS) rose 14% to 11.75p after it said second-quarter losses were cut by 70% after it significantly reduced marketing spend.

The company is planning to gradually restart customer acquisition strategies over the rest of the year.

The online fashion retailer said revenues for the first quarter climbed 54% despite the crisis, and the company was “very close” to breakeven in June.

The company said that the pandemic is expected to disrupt new sales activity and timing pressure on renewals.

It also told investors that its revenue performance is consistent with guidance, with the coronavirus (COVID-19) creating delays in buying behaviours with customers in April.

Pure Gold Mining Inc (LON:PUR) shares hardened 7.4% to 109p in London after it revealed underground drilling at the Red Lake Mine had intersected gold.

The dual-listed Canadian mining company said the drilling has intersected high-grade gold mineralisation from both infill and step-out drill holes.

Drilling has extended gold mineralisation out from planned stopes, has discovered new gold zones that will be integrated into the mine plan, and has confirmed stopes scheduled for near term production.

The group reported that revenues in the second quarter had fallen 27.5% year-on-year due to falls in circulation and ad spending, although it highlighted that trends had “slightly improved” in June with revenue falling only 23.9% in the month compared to 30.5% in April.

Print media declined by 29.5% in the period while digital revenues were down 14.8%. Reach added that circulation remained “significant below pre-[coronavirus] levels” and that local advertising was “continuing to be challenging”.

10.30am: Altitude hit by slump in promotional activity

Altitude Group PLC (LON:ALT), down 17% at 23.75p, was the top faller in London on Tuesday morning after a disappointing trading update.

From mid-March and throughout April and May, Altitudes supplier partners reported sharp year on year declines of up to 80% in regular promotional product orders, in-line with wider industry reporting.

With many US states beginning to emerge from shutdown – although others appear to be heading back towards it – activity has increased through Altitudes marketplace with demand for traditional products showing modest increases. Industry reporting supports order activity for June at around 50% of 2019 levels, it added.

9.30am: Avingtrans and LPA Group on the rise after contract wins

The company said its results for the year to the end of May are expected to be “close to original expectations” despite the disruptions caused by the coronavirus pandemic.

Also on the rise on the back of new contract awards was LPA Group PLC (LON:LPA), the lighting and electro-mechanical systems maker, up 7.0% at 68.5p.

The contract awards, worth £3.3mln in aggregate, are for the UK and Australian railway markets.

"These three awards, from three separate customers, continue to grow our order book and underpin sales through the coming periods, whilst reinforcing that rail projects continue in these uncertain times,” said Paul Curtis, the chief executive officer of LPA in a statement.

finnCap Group PLC (LON:FCAP) said it recorded its strongest ever first quarter in 2020 with revenues 50% higher than the same period last year, boosted by capital raising activities, which has flourished during the coronavirus (COVID-19) lockdown. The broker helped clients raise significant sums of cash to strengthen their balance sheets, particularly in the tech and life sciences sectors, with Avactas £48mln fundraiser among the highlights of this busy period. The company, which has added M&A and debt advisory to its traditional investment banking services, told investors that market volatility had provided a fillip too by helping drive up trading income. Turnover for the three months ended June 30, 2020, was £9.8mln, up from £6.5mln, while advisory fees were also £6.5mln.

Thor Mining PLC (LON:THR) (ASX:THR) said it has received positive assay results from samples identified as having vanadium potential taken from field sampling in the Colorado mineral claims held by American Vanadium Pty Ltd. Other samples, identified as potentially uranium-rich, are being assayed at a separate laboratory facility which is better equipped for samples of this nature. American Vanadium holds interests in uranium and vanadium-focussed projects, in Colorado and Utah in the United States of America. Thor announced plans to acquire it in June, subject to satisfaction of due diligence requirements.

SkinBioTherapeutics PLC (LON:SBTX) has said its collaboration with Winclove Probiotics on the development of a food supplement is well ahead of schedule. SkinBio is working with Winclove on a probiotic food supplement to help manage the symptoms associated with the skin condition, psoriasis. The good news is that Winclove has already come up with a formulation to be known as AxisBiotix Ps. Before going into commercial production, the product will undergo a human study with patients suffering from mild to moderate psoriasis. SkinBio stressed that the study will be a food supplement study, not a therapeutic trial, and as such should not take as long.

Open Orphan PLC (LON:ORPH) said its hVIVO lab services operation has signed three new contracts, adding to the momentum behind the business. It has landed work with NoBACZ, a spin-out from the University of Cambridge, a new second deal with Nearmedic, and has agreed to run testing for an unnamed Cambridge, Massachusetts biotech. "We are now continuing to sign additional new virology services contracts with third-party customers,” said Open Orphan chairman Cathal Friel in a statement.

Seeing Machines Limited (LON:SEE) has welcomed the passing in the US House of Representatives of the Moving Forward Act, a new automotive safety bill. It promises to drive demand for the companys driver monitoring system (DMS) technology, which use cameras and facial recognition to ensure drivers are paying attention to the road. The Moving Forward Act specifically includes a plan to mandate driver monitoring in cars and trucks sold from 2024. It will also require new vehicles to have automatic braking, lane-keeping, blind-spot detection, event data recorders at the same time.

Rosslyn Data Technologies PLC (LON:RDT), the Big Data technology company, has been earning brownie points by helping its clients manage more efficiently during the coronavirus (COVID-19) lockdown. The group said that while its operations have not been adversely affected by the lockdown, a lot of its customers have had to find new ways of doing things, and Rosslyn's technology has assisted in enabling them to do this. The coronavirus pandemic has also highlighted new risks within the supply chain and Rosslyn said it has been able to assist its clients to better understand where the risks are and enabled them to build increased resilience into their supply chains.

Frontier IP Group PLC (LON:FIPP), a specialist in commercialising intellectual property, has revealed that its portfolio company, Celerum Limited has been sub-contracted to support software development for Aberdeen-based marine logistics firm PlanSea Solutions Limited. The company noted that the work builds on approaches proven in several projects undertaken by Celerum founder Professor John McCall, former Head of the School of Computing, Science and Digital Media at RGU who has more than 25 years research experience in nature-inspired computing (NIC) which looks to develop new software and AI algorithms based on natural processes and behaviours. Examples of NIC include particle swarm optimisation, based on how birds and fish behave in flocks and schools, and genetic algorithms, software techniques based on natural selection and evolutionary genetics. Frontier IP holds a 33.8% equity stake in Celerum.

Collagen Solutions PLC (LON:COS) has inked a new three-year agreement with NovaBone Products, which produces US FDA-cleared synthetic bone grafts. NovaBone is a long-standing customer, since 2015, with the AIM-quoted firm supplying specialised collagen biomaterials specific to their line of bone graft products that are used in orthopaedic and dental applications. The contract begins with a minimum 3-year period and It formalises a longer-term supply arrangement to ensure NovaBone has consistent and increased access to this specialised material to support their continued growth.

Live Company Group PLC (LON:LVCG) said it has agreed two new contracts for its BRICKLIVE events in the group's second-quarter as many zoos hosting its events begin to reopen following the coronavirus lockdown. In an update for the quarter, the media and events group said it has agreed to display its BRICKLIVE Ocean content at the Da Vinci Science Centre in Pennsylvania, while it has also signed a deal to display its Paw Patrol tour at the Odysseum museum in Köln in Germany until August. The company also said its BRICKLIVE Animal Paradise tour was now open at the John Bull Zoo in Michigan, while its BRICKLIVE Supersized content was now open at the Marwell Zoo in Hampshire and its BRICKLIVE Ocean exhibit is scheduled to open soon at the Bristol Zoo Gardens. The firms BRICKLIVE Big Cats show is also due to open at the Banham Zoo in Norfolk at the end of July.

Impax Asset Management Group PLC (LON:IPX) saw its assets under management (AUM) rise sharply in the April-June quarter of 2020. At the end of June, the group's AUM stood at £18.1bn, up 25.8% from the end-March figure of £14.4bn. "Despite recent market volatility, Impax has again delivered significant growth, with net inflows of over £960 million for the quarter to 30th June,” declared Ian Simm, the chief executive of Impax in the third-quarter update.