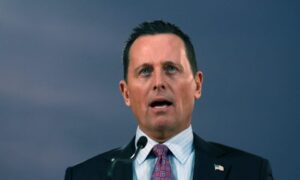 Richard Grenell has confirmed he will not be returning to his post as the U.S. ambassador to Germany.

Grenell, who also recently served as acting director of the Office of the Director of National Intelligence (DNI), confirmed reports on Sunday that he will no longer be returning to Berlin.

“True,” Grenell wrote on Twitter in response to a tweet from a reporter with The Daily Wire, who wrote that the news outlet reported two months ago that he was stepping down from his ambassador role.

Grennell, 53, who has spent little more than two years in the job, will be leaving his post in the coming weeks. According to German news agency DPA, he is expected to be replaced by Robin Quinville, deputy chief of mission at the embassy.

The news follows the U.S. Senates confirmation Thursday that President Donald Trump ally Rep. John Ratcliffe (R-Texas) will take on the role as the permanent director of national intelligence. He was narrowly confirmed with a final vote of 49-44, and is expected to enter office next week.

Grenell congratulated Ratcliffe on his new role, saying, “You will be the best DNI ever!”

The post of director of national intelligence, which was created after the Sept. 11, 2001, attacks on the United States, oversees the 17 U.S. civilian and military intelligence agencies including the CIA.

Grenell has been the U.S. ambassador to Germany since 2018. Before thRead More From Source
[contf]
[contfnew]