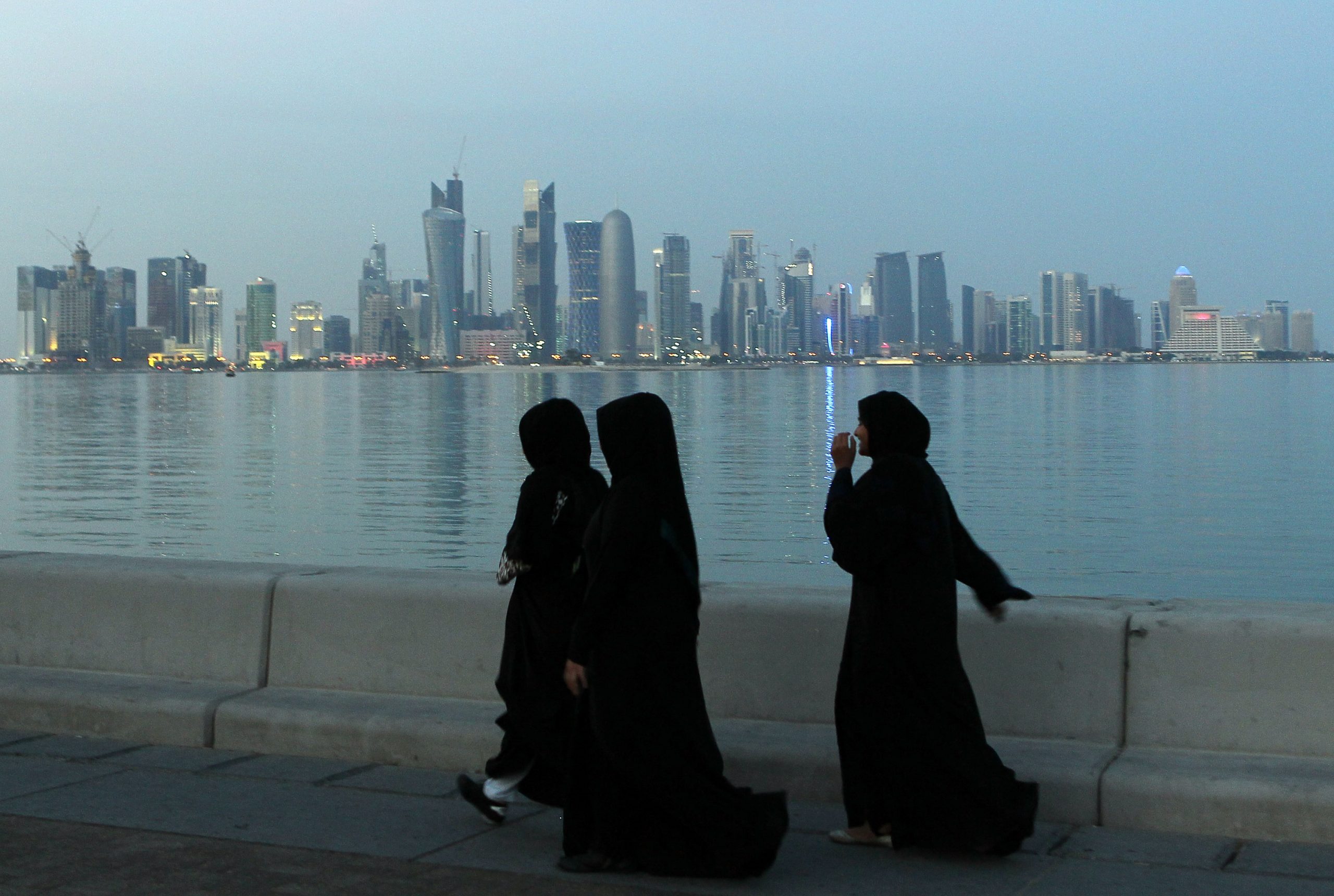 DOHA, QATAR - JANUARY 04: Arabic women walk alongside the skyline of the West Bay area in Doha on January 4, 2011 in Doha, Qatar. The International Monetary Fund (IMF) recently reiterated its projection for the Qatari economy with predictions of double digit growth for 2010 and 2011. Though natural gas and petroleum production are still the biggest two single sources of income, the non-energy sector overtook oil and gas in Qatari GDP for 2009. Qatar is heavily dependant on foreign labour from countries such as India, Sri Lanka, Bangladesh, the Phillipines and other Arab countries. Foreigners make up approximately two thirds of the Qatari population. The FIFA world cup 2022 will takes place in Qatar. (Photo by Christof Koepsel/Getty Images)

IMF released a report titled “Economic prospects and policy challenges for the GCC countries” that said that Qatar has implemented reforms to incentivize women’s participation in the labor market.

Qatar amended several new laws to impose gender equality in the market in recent years, including training, job advancement, raise in pay and new mechanisms to ensure workers’ rights, according to IMF.

The IMF said that other GCC countries also passed new laws to combat gender inequality and gender-based discrimination in labor in the past three years.

They prohibited dismissing women during pregnancy and maternity and equalized their retirement age, according to the IMF.

However, female workers’ rights in GCC remains flawed, as at least women participation is less than half of men’s, and they are in fewer managerial positions, the IMF said.

According to the IMF reports, healthcare and education played a role in decreasing the gender gap in the GCC region.

The report also shed light on the GCC’s education in primary education. In 2002, the female primary education’s percentage hit 51%, increasing to 84% in 2018. And the share of women who finished their undergraduate studies increased from 15% in 2001 to 28% in 2018.

“Despite the important advances for women in the GCC, there is scope for further reforms. Better access to finance and closer vocational guidance for women would help develop their entrepreneurial skills and enter the job market as employers,” the IMF said.

“More initiatives to reduce the stigma of health issues, particularly with mental health, and increasing the number of female medical professionals are crucial for improving women’s health in the GCC,” the IMF said.

“Full rights in terms of working hours, maternity leave and independence in asset management should be ensured across the GCC,” IMF added.

Despite the skyrocketing development in the female labor market, international media, especially the Guardian and the Financial Times, have been pouring Qatar and other GCC countries with criticism, giving no acknowledgement to the countries’ developments speed.

“The changes are structural—and permanent—and will not end when the football World Cup is over,” said Qatar’s Minister of Health, Ali bin Samikh Al Marri, in a letter to the Financial Times.

“We are the first country in the region with an International Labour Organization office, whose mandate will continue beyond 2022. Working with the ILO, we introduced laws in line with international best practices,” he added.

“The next step has been to ensure that changes are fully implemented by shifting the deeply ingrained cultural attitudes of employers,” he said.

The Minister said that Qatar applied the concept of minimum wage and that it is now monitored through electronic payments. Moreover, he added that the government is taking measures to stop those who violate the laws.

“A total of 338 businesses were suspended for not respecting working hours this summer during the hottest months,” he added.