President Vladimir Putin has approved all candidates for senior positions in the new Russian government, who were proposed earlier today by Prime Minister Dmitry Medvedev.

Most key positions in the new cabinet remain with the same outgoing ministers, such as the experienced and popular Foreign Minister Sergey Lavrov, Finance Minister Anton Siluanov and Defense Minister Sergey Shoigu.

“These are all known people with good working experience who have performed well in previous posts,” Putin said, after discussing the new government with Medvedev. The president also asked the prime minister to personally oversee the process of replacing several officials as quickly as possible. “Yes, we will definitely do this. In the nearest future, we will introduce all of the new ministers to their ministries collectives,” Medvedev replied.

President Putin signed a decree detailing the new government structure last Tuesday. The new cabinet has 22 ministerial posts instead of 21, as the Ministry of Education and Science was split into its two constituent parts. The Ministry of Telecoms and Mass Communications, which oversees the digital sector of the economy and the mass media, will be transformed into the Ministry of Digital Development. In addition, Russian trade missions abroad were transferred from the Ministry of Economic Development to the Ministry of Industry and Trade, in a bid to boost exports. 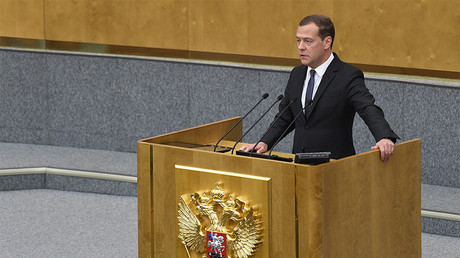 The number of deputy prime ministers, who oversee the execution of major national programs and whole sectors of the economy, increased from nine to 10. However, this did not change the overall size of the cabinet, as the additional deputy PM will combine the post with that of the finance minister.

Shortly after the presentation, Russian news agencies reported that Vladimir Putin had approved all ministerial candidates and signed a decree on the new Russian government. At the talks with German Chancellor Angela Merkel, which also took place on Friday, Medvedev said that the new cabinet had been formed and was able to function.