Russian President Vladimir Putin has said that, in order to stop internal conflict in Ukraine, Kiev authorities could grant special status with broader powers to the republics of Donbass, just as Russia had done with Chechnya.

In an extensive interview to the Austrian TV channel ORF, the full transcript of which was published on the Kremlin web-site on Tuesday, Putin said that “Russia had to make a very complicated decision and grant the Chechen Republic and many other federation subjects such status that gave them a great degree of independence within the Russian Federation.”

“By the way, the same thing could be done in Ukraine in regards of the Donbass republics and I wonder, why have not they done it yet? Under such scenario there is no necessity to restrict the usage of ethnic minorities languages in Ukraine, I mean not only Russian but also Romanian, Hungarian and Polish. There is little talk about it in Europe but these are the todays realities,” the Russian president said.

The armed conflict in the South-Eastern regions of Ukraine started in 2014 after a violent coup in Kiev brought to power the pro-Western government that almost immediately began to infringe the rights of Russian speakers and other ethnic minorities who live in these parts of the country. Paramilitary units and “volunteer battalions” manned by neo-Nazis had been sent to suppress protests but were met with armed resistance from local volunteers.

The conflict that has already claimed thousands of lives lingers to this day and residents of the South-Eastern Ukraine have announced the secession from the Ukrainian state and forming of the two independent republics – Donetsk and Lugansk. 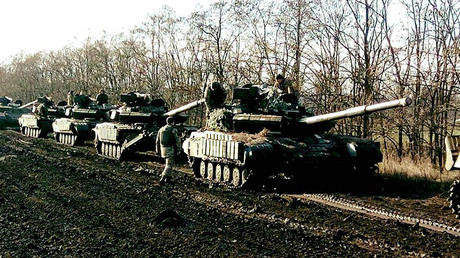 In September 2017, Putin called for a UN peacekeeping mission to be sent to the war-torn eastern regions of Ukraine. The mission would have been deployed to the line of demarcation to protect the OSCE mission, which monitors the ceasefire. Moscows initiative was welcomed by German Foreign Minister Sigmar Gabriel and Chancellor Angela Merkel, but the US and Ukrainian delegations refused to discuss it in the UN Security Council, bringing about a stalemate.

In mid-January this year the Ukrainian parliament passed the so-called Law on the reintegration of Donbass, which grants the president the right to use military force inside Ukraine without consent from lawmakers. The Russian Foreign Ministry commented on the law in a special statement, saying the move was further confirmation of Kievs intent to resolve the conflict by force.

In late May the issue was brought up at the open session of the United Nations Security Committee. Participants of the meeting agreed that the situation in Donbass was deteriorating and reiterated their proposals on bringing it back to normal, but so far none of these proposals have been approved.