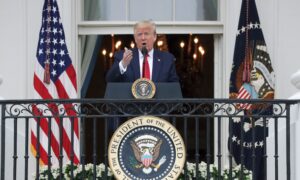 President Donald Trump said he has completed his two-week treatment of anti-malaria drug hydroxychloroquine, after announcing earlier this month that he had begun taking it following consultations with the White House physician.

In an interview with Full Measure with Sharyl Attkisson on May 23, the president said that he just finished taking the drug, which he has often touted as a “game changer” treatment for the virus, despite warnings from the Food and Drug Administration (FDA) and a number of medical professionals about its effectiveness and potentially dangerous side effects.

“Finished, just finished,” Trump said of his two-week program. “And by the way, Im still here. To the best of my knowledge, here I am,” Trump, who has repeatedly tested negative for the virus, added.

When asked if he was sending “mixed messages” to the American people by taking the drug after scientists and White House officials warned against taking it, Trump defended his actions, explaining that he had heard “tremendous reports about it.”

“Many people think it saved their lives,” he said. “Doctors come out with reports. You had a study in France, you had a study in Italy that were incredible studies. Look, if somebody else were promoting it other than me, call it a promotion because I want people to get better. I dont get anything. I dont gain anything other than if its something that helps, thats a good thing. Thats what I want. Thats all I want. I believe in it enough that I took a program because I had two people in the White House that tested positive. I figured maybe its a good thing to take a program. You know, we take a little bit of a period of time, I think it was two weeks. But hydroxy has had tremendous, if you lookRead More From Source
[contf]
[contfnew]