As the end of the year draws near and conservatives continue to celebrate just how much winning has occurred since Donald Trump’s election, it’s time to look back on some of the president’s best tweets of 2017.

President Trump’s Twitter prowess was long known before he entered the world of politics, but throughout 2017, the president continued to use the social media tool that helped him get elected to reach out to his supporters directly, comment on political issues and call out those that attacked him head-on. Here are just some of the President’s best tweets of the past year.

1: North Korea and the Rocket Man

In one of President Trump’s funniest tweets, he called out North Korean dictator Kim Jong Un for remarks he made about Trump. The president delivered a sarcastic non-insult, stating that he would “NEVER” call the Korean dictator “short and fat”:

Why would Kim Jong-un insult me by calling me "old," when I would NEVER call him "short and fat?" Oh well, I try so hard to be his friend – and maybe someday that will happen!

In another stroke of genius trolling, President Trump shared an edited clip of his 2007 appearance on WWE’s Wrestlemania. The gif showed the president body slamming a wrestler with the CNN logo superimposed over his face. At the time, President Trump’s Homeland Security Advisor, Thomas Bossert, defended the tweet, saying, “There’s a lot of cable-news shows that reach directly into hundreds of thousands of viewers. And they’re really not always very fair to the president. So I’m pretty proud of the president for developing a Twitter and a social media platform where he can talk directly to the American people.”

So far, President Trump has posted 36 tweets that mention CNN by name and 146 tweets that use the term “Fake News.” Given the mainstream media’s continued attacks against Trump, it’s likely that we will see a large growth in the use of these terms in 2018.

In a true example of the power of President Trump’s Twitter account, a single misspelled word in a tweet spawned an entire new meme and Breitbart News Coffee Mug. The President sent out a tweet which read, “Despite the constant negative press covfefe”:

This error led to a number of memes surrounding the president and what “covfefe” could mean:

"And just before you serve it, you hit it with a dash of #Covfefe" pic.twitter.com/fm9CAF4Iyz

The president even played along with the meme himself, challenging others to discover the true meaning of “covfefe”:

Who can figure out the true meaning of "covfefe" ??? Enjoy!

On January 20th, then President-elect Trump sent out a tweet, echoing many of his campaign promises. “I will see you at 11: A.M. for the swearing-in,” tweeted the President. “THE MOVEMENT CONTINUES – THE WORK BEGINS!” This echoed many of Trump’s tweets during the 2016 election when he promised to get to work immediately on draining the D.C. swamp of the corrupt political elite.

It all begins today! I will see you at 11:00 A.M. for the swearing-in. THE MOVEMENT CONTINUES – THE WORK BEGINS!

In a slightly more serious tweet, President Trump posted a video of him dancing with First Lady Melania Trump at the Freedom Ball shortly after Trump’s Presidential inauguration. The tweet was well received by his Twitter fans, who favorited the tweet nearly 300,000 times.

THANK YOU for another wonderful evening in Washington, D.C. TOGETHER, we will MAKE AMERICA GREAT AGAIN

Shortly after a terror attack in London that saw eight murdered and 48 more injured, the president took to Twitter to offer help in a display of solidarity with the UK. The President promised that America would do whatever they could to help those in London, ending the tweet saying, “WE ARE WITH YOU. GOD BLESS!”

Whatever the United States can do to help out in London and the U. K., we will be there – WE ARE WITH YOU. GOD BLESS!

President Trump also noted that countries needed to get serious about the security of their people or the problem of terrorism would only get worse:

We must stop being politically correct and get down to the business of security for our people. If we don't get smart it will only get worse

Following President Trump’s remarks regarding the death of a protester at Charlottesville, President Trump condemned the fake news spread by outlets such as CNN who attempted to imply that the president was not sufficiently critical of the rally:

Made additional remarks on Charlottesville and realize once again that the #Fake News Media will never be satisfied…truly bad people!

A short time later, President Trump retweeted a cartoon featuring CNN trying to stop the Trump Train, which the mainstream media attempted to turn into another attack on the president. 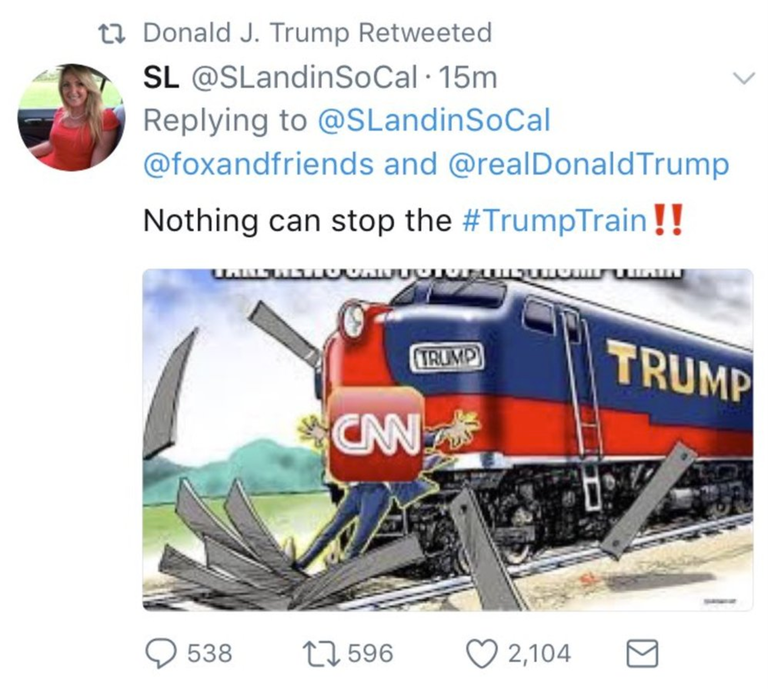 Shortly after President Trump’s inauguration, a George Soros funded “Women’s March” was held in Washington, DC in protest , accusing him of being a misogynist, among a number of other labels. Trump responded to the march by asking why these people had not chosen to vote to prevent him from becoming president:

Watched protests yesterday but was under the impression that we just had an election! Why didn't these people vote? Celebs hurt cause badly.

He also commended the protesters for their peaceful methods:

Peaceful protests are a hallmark of our democracy. Even if I don't always agree, I recognize the rights of people to express their views.

Following the passing of the new GOP tax bill, President Trump took to Twitter to praise the cuts and attack the “Fake News Media” who criticised the bill.

The Massive Tax Cuts, which the Fake News Media is desperate to write badly about so as to please their Democrat bosses, will soon be kicking in and will speak for themselves. Companies are already making big payments to workers. Dems want to raise taxes, hate these big Cuts!

Our big and very popular Tax Cut and Reform Bill has taken on an unexpected new source of “love” – that is big companies and corporations showering their workers with bonuses. This is a phenomenon that nobody even thought of, and now it is the rage. Merry Christmas!

President Trump also retweeted an interview with his daughter, Ivanka Trump, in which she said that the average American family can’t come up with $400 in the event of an emergency and that her father was dedicated to changing that, to which Trump said, “So true!”

In what is probably one of the most defining phrases in all of President Trump’s rhetoric is his campaign slogan of “Make America Great Again.” In a tweet from February 4th, just before President Trump’s proposed travel ban was blocked by a federal judge, the president simply tweeted his key catchphrase:

Lucas Nolan is a reporter for Breitbart News covering issues of free speech and online censorship. Follow him on Twitter @LucasNolan_ or email him at [email protected].