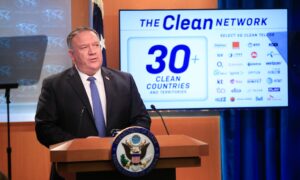 U.S. Secretary of State Mike Pompeo will travel to Central and Eastern Europe next week to discuss regional security issues, efforts to counter Chinese and Russian influence in the region, and energy cooperation.

Pompeo will visit the Czech Republic on Aug. 11 where will meet with his Czech counterpart Tomáš Petříček to commemorate the 75th anniversary of the liberation of Western Czechoslovakia in World War II by the U.S. Army. Pompeo will also meet with Czech Prime Minister Andrej Babis to discuss nuclear energy cooperation and will have “a courtesy call” with Czech President Milos Zeman, according to a State Department statement.

The main topics of Pompeos talks in the Czech Republic will be defense and economic cooperation as well as protecting human rights, according to Philip Reeker, the acting assistant secretary of state at the Bureau of European and Eurasian Affairs.

Reeker contrasted the U.S. Armys liberation of the Czechs in Western Czechoslovakia from the German occupation in 1945 with the Soviet Red Army, which imposed a communist dictatorship on the country and practically occupied it until the disintegration of the Eastern Communist Bloc in Europe in 1989.

At a briefing on Friday, Reeker noted the Czech Republics participation alongside the United States in missions in Afghanistan and Iraq, saying the country serves as “the U.S. protecting power” in Syria.

Czechia, as part of a comprehensive 5G security initiative, hosted a conference where representatives of governments from more than 30 countries, the European Union, and NATO developed the Prague Proposals: a set of recommendations and principles for countries to design, develop, and maintain secure 5G networks.

On Aug. 13, Pompeo will travel to Slovenia where he will sign a Joint Declaration on 5G Security with Slovenias Foreign Minister Anze Logar and meet with Slovenias President Borut Pahor and Prime Minister Janez Jansa to discuss cooperation between the two countries on nuclear energy as well as “Western Balkan integration,” according to the State Department.

Reeker praised Slovenia as a “capable, reliable defense partner” that has played an important role “in promoting stability and security” in the region such as conducting together with the United States demining operations and training in the Western Balkans over the past two decades.

Pompeo will also meet in Vienna with Rafael Grossi, the Director General of the International Atomic Energy Agency (IAEA).

The IAEA is charged with monitoring Irans adherence to the 2015 nuclear deal from which the United States withdrew in 2018.

Austria is “an East-West hub, a venue for international dialogue and negotiations,” Reeker said, adding that the United States has a mission to the Organization for Security and Cooperation in Europe (OSCE) headquartered there.

Austria is not a NATO member but contributes to NATOs mission in Afghanistan, as well as in the Middle East and Africa.