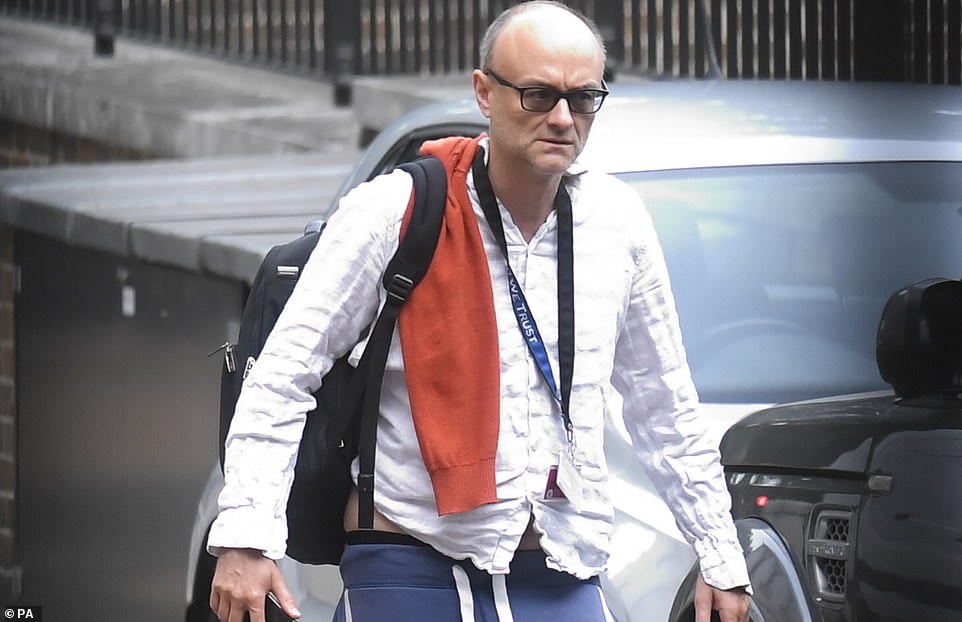 Police spoke to Dominic Cummings about breaching the governments lockdown rules after he was seen in Durham, 264 miles from his London home, despite having had symptoms of coronavirus, the Guardian can reveal.

Officers approached Boris Johnsons key adviser days after he was seen rushing out of Downing Street when the prime minister tested positive for the virus at the end of March, a joint investigation by the Guardian and the Mirror has found.

At the time, the government had instructed people not to travel and to stay at their family homes. Cummings, however, was seen in Durham. A member of the public is understood to have seen him and made a complaint to the police.

When asked if Cummings had been warned about breaching the lockdown, a spokesman for Durham Constabulary said: “On Tuesday, March 31, our officers were made aware of reports that an individual had travelled from London to Durham and was present at an address in the city.

“Officers made contact with the owners of that address who confirmed that the individual in question was present and was self-isolating in part of the house.

“In line with national policing guidance, officers explained to the family the guidelines around self-isolation and reiterated the appropriate advice around essential travel.”

Downing Street has previously refused to disclose where Cummings was staying during the lockdown.

The Guardian has also been told Cummings was spotted near the gate of his parents home with a young child, believed to be his son, at around 5.45pm on Sunday 5 April, five days after the complaint was made to the police.

This was just over a week after he began self-isolating with symptoms of the virus. It was also less than two hours before the prime minister was admitted to hospital after his symptoms worsened.

The Guardian has previously asked Downing Street about this sighting in April, but officials declined to comment.

The disclosure that Cummings was spoken to by police raises potentially awkward questions for him and No 10. With the UK in the grip of the pandemic, the governments own advice urged everyone to stay at their main homes to avoid the spread of the virus and to save lives.

“You should not be visiting family members who do not live in your home,” the guidance said. “The only exception is if they need help, such as having shopping or medication dropped off.”

Instead, Cummings appears to have made the trip from his home in east London to Durham at a time when Johnson and the health secretary, Matt Hancock, had tested positive.

Downing Street said Cummings had developed symptoms “over the weekend” of the 28 and 29 March.

When questioned about Cummings whereabouts during the following week, a Downing Street spokesperson said only that he was in contact with No 10.

A Durham resident who lives near the Cummings family home expressed shock and annoyance after the 5 April sighting.

The witness, who did not wish to be named, told the Guardian: “I was really annoyed. I thought its OK for you to drive all the way up to Durham and escape from London. I sympathise with him wanting to do that, but other people are not allowed to do that. Its one rule for Dominic Cummings and one rule for the rest of us.”

Tulip Siddiq MP, the vice chair of the Labour party, said of the reports: “If accurate, the prime ministers chief adviser appears to have breached the lockdown rules. The governments guidance was very clear: stay at home and no non-essential travel. The British people do not expect there to be one rule for them and another rule for Dominic Cummings. Number 10 needs to provide a very swift explanation for his actions.”

The acting leader of the Liberal Democrats, Ed Davey, tweeted: “If Dominic Cummings has broken the lockdown guidelines he will have to resign. Its as simple as that.”

Breaking lockdown rules has been a resigning issue for senior officials.

Prof Neil Ferguson, the epidemiologist whose modelling prompted the lockdown, quit as a member of the Scientific Advisory Group for Emergencies (Sage) for flouting physical distancing rules when he was visited by his girlfriend.

After he stood aside, senior Tories insisted he had done the right thing.

Hancock said he was “speechless” and added: “I think he took the right decision to resign.”

Scotlands chief medical officer, Catherine Calderwood, was also forced to quit after making two trips to her second home during the coronavirus lockdown.

The sightings raise questions about the governments commitment to the “stay at home” message it was repeating to the public in the first stage of the lockdown. The Guardian has already revealed that the communities secretary, Robert Jenrick, travelled to his parents home on the same weekend. Jenrick said he was delivering medicine and essential supplies.

Cummings was seen running through Downing Street on 27 March after it was announced that Johnson and Hancock had tested positive for coronavirus.

Cummings and his wife, Mary Wakefield, an editor at the Spectator, last month gave a detailed account of how they coped under lockdown while having the symptoms of coronavirus.

Writing in the magazine, Wakefield said that Cummings rushed home to look after her when she began showing symptoms. A day later he began feeling “weird” and then couldnt get out of bed. “Day in, day out for 10 days he lay doggo with a high fever and spasms,” she said.

The article goes on: “Just as Dom was beginning to feel better … Boris was heading in the other direction, into hospital.” This was the evening when Cummings was first seen near Durham with the child. On the same evening, Scotlands chief medical officer, Catherine Calderwood, was forced to resign after she was photographed visiting her second home in Fife.

Wakefields article does not say where they were during quarantine, but it adds: “After the uncertainty of the bug itself, we emerged from quarantine into almost comical uncertainty of London lockdown.” Wakefield has been asked to clarify whether the family were in their London home at the time.

In the same issue of the Spectator, Cummings wrote: “At the end of March and for the first two weeks of April I was ill, so we were both shut in together.” He described the experience as “sticky … Everything is covered in a layer of spilt Ribena, honey, peanut butter and playschool glue.”

A witness said they were going past the Cummings family home on 5 April on their regular exercise route when they heard Abbas Dancing Queen playing loudly from the property.

“I got the shock of my life, as I looked over to the gates and saw him,” they said. “There was a child, presumably his little boy, running around in front. I recognised Dominic Cummings, hes a very distinctive figure.”

Despite the mild weather that weekend, they said Cummings was wearing a dark coat and thick tartan scarf. “He must have been wearing them to protect himself while recovering from Covid-19,” they said.