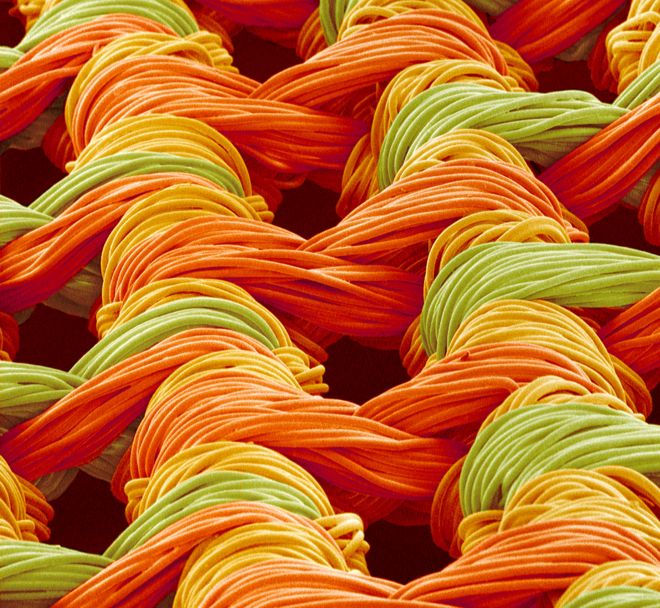 When you add it up, the total amount of synthetic microfibres going into the wider environment as we wash our clothes is an astonishing number.

US scientists estimate it to be 5.6 million tonnes since we first started wearing those polyester and nylon garments in a big way in the 1950s.

Just over half this mass – 2.9 million tonnes – has likely ended up in our rivers and seas.

But while we fret about water pollution, and rightly so, increasingly this synthetic “fluff” issue is one that affects the land.

The University of California, Santa Barbara, team which did the calculations found that emission to the terrestrial environment has now overtaken that to water bodies – some 176,500 tonnes a year versus 167,000 tonnes.

The reason? Wastewater treatment works have become very good at catching the fibres lost from washing machines. What’s happening is those captured fibres, along with biosolid sludge, are then being applied to cropland or simply buried in landfills.

“I hear people say that the synthetic microfibre problem from apparel washing will take care of itself as wastewater treatment works become more widespread around the world and more efficient. But really what we’re doing is just moving the problem from one environmental compartment to another,” Roland Geyer, from UCSB’s Bren School of Environmental Science and Management, told BBC News.

The industrial ecologist, working with a range of other experts, has previously totted up the total amount of virgin plastics ever produced (8.3 billion tonnes); and the annual flow of plastics into the oceans (roughly eight million tonnes a year).

These types of calculations are fiendishly complicated, involve models and necessarily resort to quite a few assumptions to plug real-world data gaps.

They can’t be absolute in their descriptions of the issues, but at the very least they provide some ball-park figures on which to base serious conversations around mitigation.

About 14% of all plastic is used to make synthetic fibres, principally for clothing. When those garments are washed, they will shed tiny strands that are much thinner than a human hair.

For its just-published report in the journal PLoS, the UCSB team tried to work out how much synthetic clothing had been produced in the past 65 years or so; how it’s been used; and how it’s been cleaned.

Different methods (and detergents) will shed different amounts of fibres. We also know the rotating paddles in top-loaders apply a lot of mechanical pressure to garments and are therefore regarded as big shedders of microfibres.

And think for a moment how many of the garments in an individual’s wardrobe are actually routinely worn (and therefore cleaned), and how many stay on the shelf and rarely get an outing? That favourite old fleece almost certainly sees much more action than the office jacket and tie. It’s thought a quarter or more of a person’s clothing store probably isn’t being worn at all or only very, very infrequently.

When the UCSB team ran its flow analysis on all these variables, the number that emerged for the total mass of synthetic microfibres emitted from apparel washing between 1950 and 2016 was 5.6 million tonnes.

Half of this amount, however, was released in just the last decade. This is in part a consequence of course of our ballooning collections of clothes.

As stated above, increasingly the shed fibres are ending up in land settings, and improving the availability of modern wastewater treatment infrastructure is only going to accentuate this trend.

“Large-scale removal of microfibres from the environment is unlikely to be technically feasible or economically viable, so the focus needs to be on emission prevention,” Bren School colleague and PLoS article lead author Jenna Gavigan said.

“Since wastewater treatment plants don’t necessarily reduce emissions to the environment, our focus needs to be on reducing emissions before they enter the wastewater stream.”

This means a suite of solutions, commented Jamie Woodward, from the Department of Geography at The University of Manchester and whose group was the first to show that UK rivers could be very heavily contaminated with microplastics.

“Microfibres pose a particular challenge because these escape from wastewater treatment plants in their trillions – even with advanced treatment,” he explained.

“We know that microplastics have been in the environment for decades, but we still don’t know what an environmentally acceptable level of microplastic contamination might look like – in any environment. This underscores the importance of research aimed at better understanding the ecological impact of microfibres in both terrestrial and aquatic environments. Microplastic pollution is a fact of modern life – it is here to stay and we are only beginning to appreciate the consequences.”

And the Prof added: “Natural fibres such as wool and cotton have been present in our rivers and seas in significant concentrations since the Industrial Revolution. The durability of synthetic fibres means they will be in the natural environment for a very long time and can be recycled from sludge treated soils into rivers and, ultimately, the ocean.”