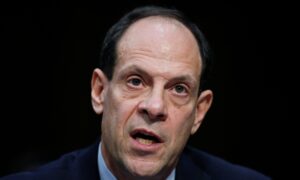 WASHINGTON—The No. 2 official in the Pentagons office of inspector general, Glenn Fine, resigned May 26, several weeks after he was effectively removed as head of a special board to oversee auditing of the $2.2 trillion CCP (Chinese Communist Party) virus economic relief package.

A spokeswoman for the Pentagons Office of Inspector General, Dwrena Allen, said Fine was not asked to resign. Fine issued a brief written statement lauding the importance of government watchdogs.

“The role of inspectors general is a strength of our system of government,” Fine said. “They provide independent oversight to help improve government operations in a transparent way. They are a vital component of our system of checks and balances, and I am grateful to have been part of that system.”

Fine, who received his law degree from Harvard, came to the Pentagons inspector generals office as the No. 2 official in 2015 and had previously been inspector general at the Department of Justice from 2000 to 2011. He also is a former assistant United States attorney in Washington.