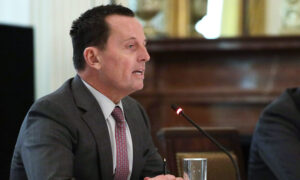 Government officials buried parts of the story about the investigation of the Trump campaign beneath the veil of classification in order to conceal what really happened from the American people, according to former acting Director of National Intelligence Richard Grenell.

Grenell, who had completed his term as the acting head of the intelligence community, told radio show host Mark Levin that government elites in Washington routinely “overclassify” official records in order to protect reputations.

“It angers me, because what happens is you take information and you weaponize it, and its an elite thing where you keep the information in the back, and you pretend like the public doesnt need it. This is a problem. We cant overclassify things just to protect reputations.”

During his three-month term, Grenell declassified a number of documents connected to the investigation of the Trump campaign that cast a damning light on senior Obama-administration officials. He also significantly reduced the size of the intelligence bureaucracy, in line with recommendations of career officials who had conducted four studies on the matter.

The FBI opened the investigation of the Trump campaign in July 2016 and added Flynn as a target in August of that year. The investigation—codenamed Crossfire Hurricane—was tainted with bias among the key officials involved and the discovery of a long list of serious errors in applications to spy on Trump campaign associate Carter Page. Recently declassified documents also strongly suggest that top FBI officials were out to entrap Flynn. Grenell called what transpired “an outrage.”

The troubling details remained classified for years despite an aggressive push for transparency from Congress and the private sector. Crossfire Hurricane in May 2017 evolved into the special counsel investigation by Robert Mueller that polarized the nation for 22 months.

“In the Russian collusion investigation, early on, there were people who raised red flags. And many of those people were silenced or their words classified and put away,” Grenell said.

“So weve seen that through some of the stuff thats come out. But I believe that if we want the American public to believe in the intelligence agencies and grow our intelligence agencies, because theyre good and theyre going to protect the United States, then we have to improve the reputation of the current process.

“Its really important for people to come clean and let the public realize the mistakes that were made—thats how you improve the reputation.”

Grenells term as acting head of the intelligence community concluded on May 26 with the swearing-in of Director of National Intelligence John Ratcliffe.

Levin, the conservative radio host Grenell spoke with, was the first to sound the alarm on spying on the Trump campaign. Levins comments are believeRead More From Source
[contf]
[contfnew]