The Russian Embassy in Washington has expressed indignation over a lack of reaction from the US to the 2014 Odessa massacre in Ukraine, in which nationalist radicals killed scores of anti-Maidan protesters.

“We are infuriated over the fact that the US administration uses silent consent to evade the mentioning the Odessa events and the 'freezing' of their investigation by Kiev. This has been confirmed as they have not found space in the recent State Department report on Human Rights for this tragedy and multiple similar Ukrainian crimes,” the Russian diplomats said in a statement.

They also stated that the current situation is further proof of Washingtons unwillingness to take an objective look at human rights in Ukraine and a lack of intent to use its influence on the Ukrainian authorities to improve them.

“It causes a great concern that the USA, that had declared itself a standard in zero tolerance towards any violation of human rights, hypocritically turns a blind eye towards the open facts of outrage committed by radical Ukrainian nationalists,” the diplomats wrote.

“The impunity gives the nationalists a feeling that everything is permitted to them. They continue their outrageous actions. There are multiple incidents in which they desecrated the monuments to the fight of the Ukrainian people and the whole Soviet people against Nazism,” the message reads.

At least 48 people were killed and over 200 were injured when radical Ukrainian nationalists attacked pro-Russian protesters in the Ukrainian city of Odessa on May 2, 2014. The rally was held soon after a coup in Kiev displaced the elected president and started to replace regional administrations with people loyal to the new regime and hostile to Russia.

A large group of Ukrainian radicals attacked the anti-coup activists and set fire to their camp in the central square of the city. Many people fled to the nearby “Palace of Trade Unions” building, but the radicals set it on fire with petrol bombs. People suffocated and burned to death, some of them were killed when they jumped out of high-floor windows. 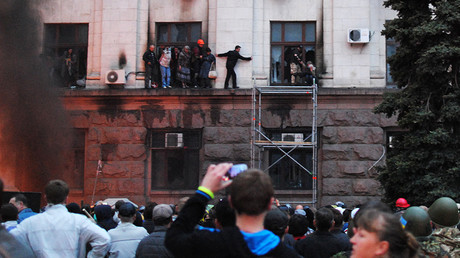 Some of those who survived the fall were beaten to death with bats on the ground and there is footage of at least one of the attackers shooting people with a handgun. An official report from Kiev said that 32 people suffocated or died in the fire, 10 fell to their deaths, and another six people died of gunshot wounds.

According to unofficial estimates the number of casualties could be much higher – one report said that 397 people were killed in Odessa clashes.

Russia appealed to the UN and the Organization for Security and Co-operation in Europe (OSCE) to conduct an impartial investigation of the events back in 2014, but the proposal was rejected.