Mars is a desert world know for its shifting dunes, tantalising traces of waters, and many, many dramatic creators.

And now a dramatic new blast hole has appeared sometime between September 2016 and February 2019.

Sharing the images on Twitter, NASA, the US space agency, suggested they looked like works of art. 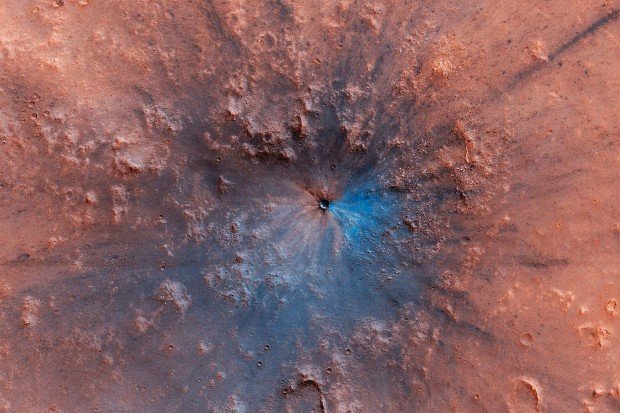 STRIKE: The space rock smashed into the planet (Pic: NASA)

“An impressionist painting? No, its a new impact crater that has appeared on the surface of Mars, formed at most between September 2016 and February 2019," they said.

“What makes this stand out is the darker material exposed beneath the reddish dust.”

HiRISE team member and University of Arizona staff scientist Veronica Bray said: "It is a reminder of what's out there.”

Speaking to Space.com, she said she finds craters the most interesting surface features on Mars.

"It's a gorgeous [crater]. I'm glad I got it in the colour strip," she added.

RED: The planet is know to have a desert-like surface (Pic: GETTY)

Mars researcher Peter Grindrod, who tracks creators on the planets surface, agreed that the find was a big deal.