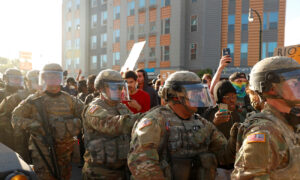 Speaking at a press briefing on Saturday, Walz said that by the afternoon, another 1,000 National Guard soldiers will be in Minneapolis in addition to the 700 that are already deployed to the city.

According to Walz, its “an action that has never been taken in the 164-year history of the Minnesota National Guard.”

He said the briefing, which followed an early morning press conference, was to provide “an update on a highly dangerous and a rapidly evolving situation with folks bent on destroying property with no regard for the safety of Minnesotans and certainly no desire to make a statement other than wanton destruction and chaos.”

Walz added that the situation in Minneapolis “is no longer in any way about the murder of George Floyd. It is about attacking civil society, instilling fear, and disrupting our great cities.”

At the earlier briefing, which took place at around 1:30 a.m. on Saturday, Walz said that at least 1,000 additional Minnesota National Guard troops would be activated Saturday to help stem the violent riots.

He said that despite mobilizing the “largest civilian deployment in Minnesota history,” it has proven not enough to quell the chaos, marked by riots, looting, and fire-setting.

“The situation is incredibly dangerous. The situation is fluid. It is dynamic,” Walz said. Citing the “sheer volume” of the crowds rioting in the streets, he said getting the situation under control will take a response never before seen in the state because “theres simply more of them than us.”

Explaining the need for more resources, Walz said it takes multiple officers “to detain one person in a volatile environment,” adding that “the minute you turn your back, the other ones are throwing bottles of urine, in some cases, firing weapons.”

“This is the largest concentration of law enforcement in the history of Minnesota,” Walz said, adding, “and it is not enough.”

Maj. General Jon Jensen, adjutant general of the Minnesota National Guard, said at the press conference that he expects “we will exceed the 1,000 mark,” adding that he believes there will be over 1,700 soldiers to support the efforts of Minnesotas Department of Public Safety and the State Highway Patrol.

“You may have seen or heard that, this evening, the president directed the Pentagon to put units of United States Army on alert to possible operation in Minneapolis,” Jensen told the press conference. “While we were not consulted with, as it relates to that, I do believe its a prudent move to provide other options available for the governor, if the governor elects to use those resources.”

Young kids are posing in front of the fire at the side of the Stop and Shop in #Minneapolis, directly across the road from the 5th Precinct police station, where it looks like hundreds of officers are gathered, some on the roof with tear gas guns. Its 11:16pm. pic.twitter.com/ePTQb4qtbU

On Friday, the Pentagon took the rare step of ordering the Army to put several active-duty U.S. military police units on the ready to deploy to Minneapolis, Fox News reported, citing three people with direct knowledge of the orders. Soldiers in North Carolina, New York, Colorado, and Kansas were reportedly told to be ready to deploy.

“I spoke with President Trump the other night, I think it is prudent to have them ready for us to exhaust all resources that we need,” Walz said of the move.

Minneapolis Mayor Jacob Frey also took to the podium Saturday, pleading for the looting, rioting, and violence against officers to stop.

“We as a city can be so much better than this,” Frey said. “There is no honor in burning down your city. There is no pride in looting local businesses that have become institutions of a neighborhood.”

A Stop and Shop opposite the 5th Precinct police station in #Minneapolis. A fire is burning inside the back of the shop, while people are looting it. This is 10:47pm. The shop eventually burns down. pic.twitter.com/NWY8kKIHzs

He said people rely on businesses like grocery stores and pharmacies to get food and medicine, especially during the pandemic.

“If you care about your community, you got to put this to an end; it needs to stop,” Frey said.

Police said shots had been fired at law enforcement officers during Friday nights riots in Minneapolis but no one was injured. As the night dragged on, fires erupted across the citys south side, including at a Japanese restaurant, a Wells Fargo bank, Read More From Source
[contf]
[contfnew]