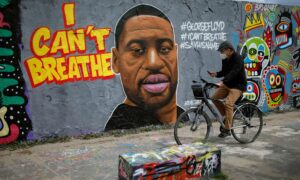 The Minneapolis City Council has voted to approve an agreement that will no longer allow the citys police forces to use neck restraints and chokeholds.

The council, at a virtual meeting on June 5, voted on the deal, which came out of negotiations between elected officials and the Minnesota Department of Human Rights, which launched a civil rights investigation in response to the death of George Floyd in police custody.

Floyd died after a Minneapolis police officer restrained him with a knee to the neck and head area for nearly nine minutes.

His official cause of death, according to the full 20-page report made public on Wednesday by the Hennepin County Medical Examiners Office, was cardiopulmonary arrest while Floyd was being restrained by police.

The autopsy also cited “complicating law enforcement subdual, restraint, and neck compression.” The manner of death was listed as homicide.

The newly adopted agreement orders the City of Minneapolis to amend its police department policy manual in a way so as to “prohibit the use of all neck restraints and choke holds for any reason.”

It also imposes measures meant to increase transparency and accountability around police discipline cases and the use of crowd-control weapons, including chemical agents, rubber bullets, flash-bangs, batons, and marking rounds.

Minneapolis Mayor Jacob Frey said at the meeting that he hopes the agreement will prompt changes to policing methods elsewhere in the country.

“This is a moment in time where we can totally change the way our police department operates,” Frey said. “We can quite literally lead the way in our nation enacting more police reform than any other city in the entire country and we cannot fail.”

The agreement, which calls on the policy manual to be amended within 10 days, will require any officer, reRead More From Source
[contf]
[contfnew]